An extremely active pattern across the northern Pacific Ocean brought record levels of snow to the western U.S. and mountain region in the final two weeks of December. Staffing issues brought on by rampant COVID spread and heavy snow across the western half of the country complicated air travel during the holidays and saw cancellations of thousands of flights.

Records snowfall measuring 16-17 feet in some regions shattered records for the month of December and will bring much needed relief to parched areas of California. Many of the state’s higher elevation reservoirs had been depleted during the 2021 drought and wildfires, and this new snowpack will help replenish groundwater as it slowly melts come spring. Improved reservoir levels will help both agriculture and hydroelectric power generation into 2022.

While the weather pattern across the West Coast and Midwest has seen colder and wetter conditions dominating, the Eastern Seaboard has seen warmer, drier weather from the deep south up into New England.

Warmer conditions in the eastern half of the country have enabled the country’s natural gas storage to catch up and surpass the trailing five-year average, as we close out 2021 with 0.6 percent more gas in underground storage compared to that metric.

However, colder temperatures during the second half of December saw stocks decline across all major regions for the most recent reported week of Dec. 24. Overall, natural gas stocks declined by 136 billion cubic feet and were 7.2 percent below where we ended 2020. Despite the drop, natural gas futures retreated after the EIA report as there is no pronounced cold or polar vortex in the present forecast as we start the new year.

The current weather pattern is expected to persist, according to the most recent NOAA two-week outlook forecast for the first half of January, so it appears that concerns about having sufficient gas in storage to supply through the winter are waning as high premiums for the nearby winter-strip months decline. Active rig counts have also benefitted from higher prices, increasing from the lows witnessed in 2020 and returning to levels not seen since February 2020. It has been a slow, steady recovery that bodes well for increased output come spring. 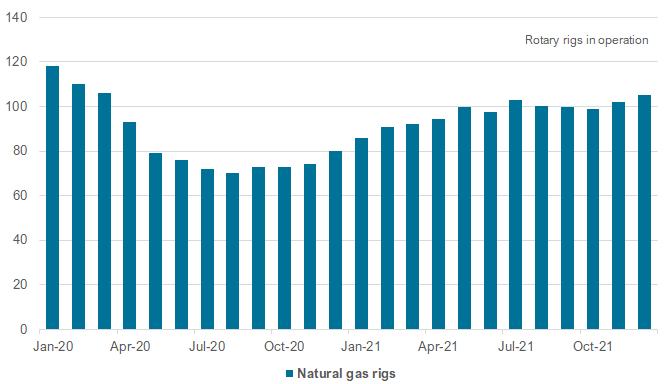