A WTO panel has ruled that Indian sugar export subsidies from 2014/15 through 2018/19 were in violation of various world trade agreements. India has already announced an appeal, which would effectively halt any other proceedings such as determinations of compensatory measures.

Appointments to the seven-member WTO Appellate Body were blocked under the U.S. Trump administration—the term of the last serving member appointed ended on Nov. 30, 2020. With world sugar prices elevated, India had already announced an end to various sugar export subsidies for the 2021/22 season, though forecasts suggest that India could still export over 5 MMT or 6 MMT.

After a rally earlier this month, nearby Mar-22 #11 world raw sugar drifted lower in the week ending Dec. 17, breaking the 20-day average and retracement support below 19.45 Wednesday. The contract traded rebounded in an inside session Thursday before a failed test of the 20-day average, closing Friday below support around 19.20 and straddling support above 19.10 at a 10-session low.

Range-bound energy futures—after a bearish move—are likely weighing on sugar, as is a stronger dollar index, which is trading sideways near five-month highs. 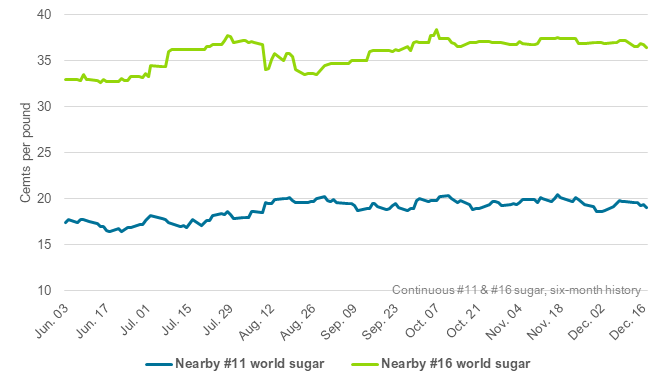