Adjusted for inflation, FAO’s Food Price Index (FPI) fell 1 percent in September, the sixth straight down month. Year on year, the September FPI was up nearly 4 percent—significant, but a vast change from growth in 2021. The 2021 FPI was up 26 percent YOY and up 28 percent from the five-year average, while the FPI for 2022 through September was up a more modest 15 percent YOY. Compared to the preceding five-year average, the 2022 FPI to date is up nearly 40 percent YOY, building as it has on 2021 levels.

Focusing on the bearish side, the drop in September’s FPI was the result in monthly declines for every subindex except for cereals, which rebounded 1.5 percent after three down months from June through August.

The cereal index is reported higher on a moderate rebound in wheat prices—as we have repeatedly noted in our commentary, there is no guarantee that Russia will allow Ukraine’s Black Sea export corridor to remain open after November. Dry weather in North and South America is also supporting wheat prices globally, with added tightness also possible for corn. FAO reported higher sorghum and rice prices, the latter driven in part by concerns about the availability of Indian supply due to recent policy changes. An improved outlook in both Australia and Russia may have kept barley prices from moving in sympathy with these other markets.

Weaker prices for palm, soybean, sunflower, and rapeseed oils drove a sixth straight month of depreciation for the edible oils index. Improved stocks or outlooks for Southeast Asia and South America weighed on the various markets, as did higher shipping via the Black Sea. 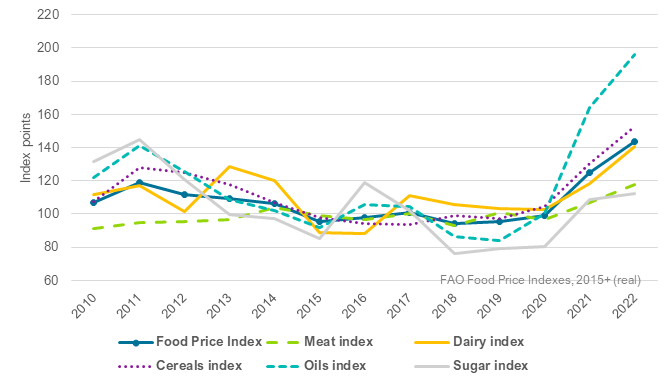