In response to delays caused by monsoon rains, India’s government announced a two-week extension of the 2021/22 export window in the first week of July. A reported 800,000 MT of sugar remained to be exported out of an export quota of 10 MMT announced this May.

Earlier this week, cane industry group ISMA requested an extension of 1 MMT in the quota. Among reasons for the additional quota are an estimated exportable surplus of between 0.6 and 0.7 MMT at the end of the national crushing season, the expectation of a strong 2022/23 crop, the industry’s funding needs, more attractive international prices, and existing contracted sales

Currently, unnamed sources suggest that the government is considering an additional export quota of some 1.0 to 1.2 MMT. India has typically been focused on domestic sugar needs and regional exports but was looking to expand exports this season on lower Brazilian supply and disruptions from weather and the Russian invasion of Ukraine.

Rains in India have been seen as favorable for the 2022/23 cane crop, which we now forecast at a record above 36 MMT of sugar. In the current season, feedstock equivalent to about 3.4 MMT of sugar, per ISMA, was diverted to ethanol manufacturing. India’s current government has committed to aggressively expanding ethanol blending to protect its currency, reduce the need for oil imports, and support the sugarcane industry.

The domestic wholesale sugar price is reported slightly weaker in July, down about half a percent from the June price but up over 5 percent YOY. 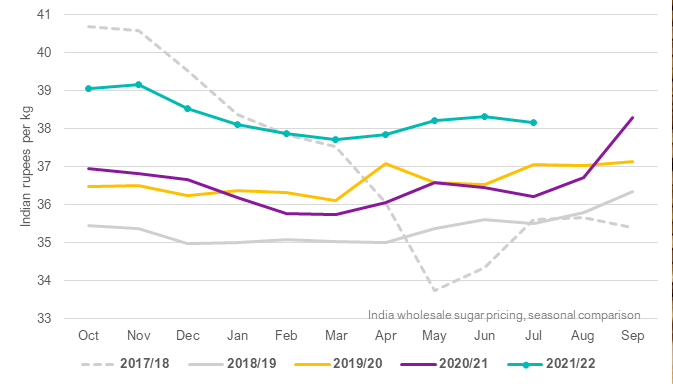