When heat becomes a weapon of mass destruction

To say that energy markets have become more politicized in recent months would be an understatement. In a recent meeting, the G7 (Canada, France, Germany, Italy, Japan, UK, and the U.S.) proposed a cap on the price of Russian oil in response to that country’s invasion of Ukraine. Russia responded by threatening to halt all exports to any country seeking to impose any price ceiling.

The announcement is seen as mostly symbolic, as a warning to major importers that only OPEC+ controls the spigot. Such responses by Russia and OPEC+ are surely a key factor keeping India from joining the G7’s proposed price cap on Russian oil.

Seen as further retaliation, Russia’s Gazprom announced that a turbine oil leak would indefinitely halt all natural gas to Germany via the Nord Stream 1 pipeline. The Kremlin stated that the shutdown is the direct result of trade sanctions limiting access to parts. Throughput via Nord Stream 1 had already been reduced to 20 percent before this latest halt.

Two weeks into September, precious little time remains before temperatures turn colder and Europe’s demands for heat ramps up seasonally. Inventories of natural gas have been lagging as a direct consequence of pipeline issues and reduced LNG exports from a primary export hub in the Gulf of Mexico.

Clearly, Putin seeks to use Europe’s reliance on Russian crude and natural gas as leverage against trade sanctions that have been hurting Russia’s economy as the war in Ukraine continues. With natural gas needed to fuel industries and residents needing it for wintertime heating, Russia’s position gets stronger as the temperature dips with no clear alternative in sight. 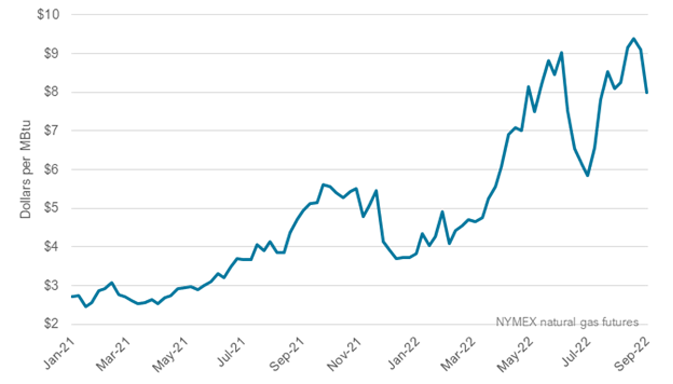