The June milk production report showed a slowdown in herd expansion has occurred during Q2 2022. Since the end of Q1, the national herd has only risen by a paltry 3,000 head, lifting the national herd to just over 9.4 million heifers. The national herd is still down some 100,000 head from levels a year ago.

The springtime flush has been very similar, both in timing as well as outright yield, to last year’s figures. The combination of herd size and yield has total milk output down slightly from 2021, down 0.9 percent YOY. The May yield was 67.61 lbs of milk per cow per day, exceeding last year’s tally of 67.36 and setting a new record for the month. Total May milk output across all 50 states was a respectable 19,715 million pounds, still down 0.6 percent vs. May 2021 due to the smaller herd.

After rapid herd growth in Q1, dairy farmers appeared to hit the pause button, and conditions stalled in Q2. With the flush now over and summer heat being felt across the country, a resumption of rapid herd expansion in the second half of the year seems unlikely.

Prices across the milk complex are likely still yielding positive revenue for farmers, but the risk of a possible recession and escalating price inflation are stoking market fears. Dairy farmers may be trying to get out in front of those issues and rein in production to a more supportive level.

With interest rates higher, the cost of capital has risen greatly and that may also be factoring into the more cautious attitude of farmers as borrowing becomes more expensive. So far, the herd has recovered only about 30 percent of its losses in 2021, and total milk production looks to be down fractionally as a result. 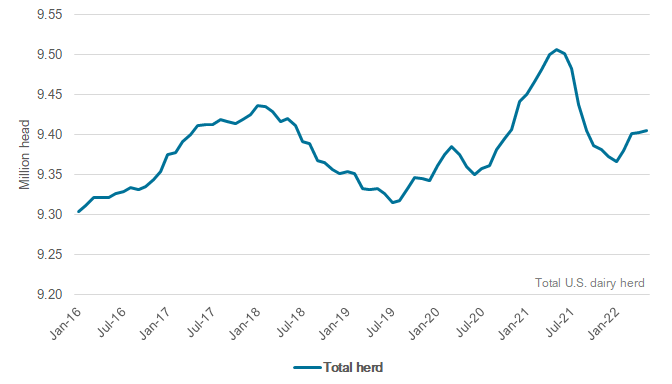