Although USDA typically tweaks the previous month’s dairy herd statistics, the most recent milk production figures released in July saw a much bigger adjustment. Changes were made going back many months, almost to the start of the calendar year, most months’ numbers.

So, rather than showing a flat dairy herd that was no longer expanding, a very different scenario now takes shape: What was seen as a gap of nearly 100,000 head across the U.S. narrows to just about 75,000 vs. June of 2021, cutting the estimated shortfall by 25 percent. Milk output was also adjusted to reflect the higher herd stats, and YTD production is now down only 0.6 percent from year-ago levels.

Most importantly, the revised figures show that the herd has been growing throughout the entire first half of 2022. It’s unclear why the statistics were underreported previously, but the new numbers were clearly welcomed by buyers across the country.

Yield for the most recent month of June was 67.13 lbs of milk per cow per day, a new national record for the month and extending springtime flush productivity longer than most had expected. Total milk output for June 2022 was reported just short of 19 billion lbs, down only 0.1 percent from June 2021.

If those types of numbers hold, total milk output across the U.S. could be down by only a fraction of a percent by the end of the year. Most of the herd culling took place in the second half of 2021, so if the herd holds close to current levels, we may also surpass the cow numbers by late Q3. As a result, we may actually see a larger herd throughout Q4 2022 and the start of 2023 than we did a year prior, which bodes well for milk supply as we roll over into the new year.

Obviously, prices have been high, and buyers are starting to balk at inflationary pressures, so we may see the tide turning for many dairy categories that have appreciated over the last 18 months. 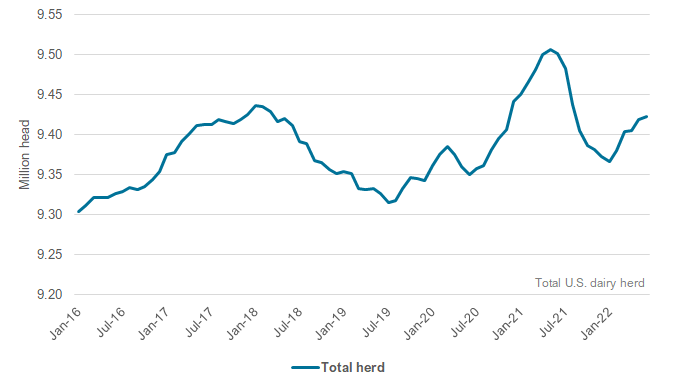