Last Friday’s WASDE report was in line with the previous week’s market expectations for soybeans—a modest increase in production due to improved yield prospects—but fell short of this week’s hopes for higher acreage.

USDA lowered 2020/21 soybean crush to 2.140 billion bushels, down 15 million bushels from the August estimate on slower summer crush amid scarce soybean supply and lower demand for soybean meal. These 15 million bushels were added to ending stocks. As expected, exports were left unchanged at 2.260 billion bushels. We did see an increase in exports at the end of August, but the volumes may not have been enough to move the needle significantly. USDA should revise the export number in the October report, and we may see 5 to 10 million bushels added to 2020/21 exports. 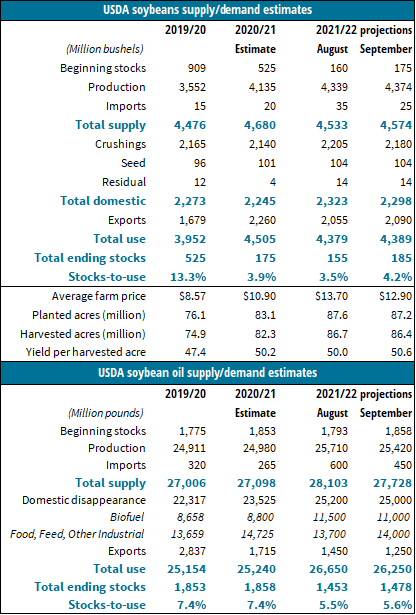 Exports for 2021/22 were raised by 35 million bushels, to 2.090 billion, based on August’s new-crop export sales. This increase was partially offset by a 25-million-bushel reduction in crush. At 2.180 billion bushels, 2021/22 soybean crush would be 2 percent from 2020/21 but up less than 1 percent from 2019/20. USDA cited weaker demand for soybean meal as reason to reduce crush. The net 10 million bushel increase in utilization ate into the 40-million-bushel increase in supply, but ending stocks are now expected to increase modestly year on year.

The market still expects 2020/21 soybean production in Argentina and Brazil to end a bit lower than USDA reporting, but USDA did not adjust estimates in the September report: Brazil’s production is still estimated at 137.0 MMT and Argentina’s at 46.0 MMT. However, USDA adjusted most of Argentina’s expected use estimates—lowering crush and raising exports, for example—which resulted in Argentina’s ending stocks declining to 24.6 MMT, down 3 percent from August. Brazil saw a slight reduction in projected exports, declining 500,000 MT from August to 82.0 MMT, which were added to ending stocks. Last week, CONAB estimated Brazil’s 2020/21 soybean production at 135.9 MMT, so USDA may revise its number next month.

U.S. soybean oil ending stocks for 2020/21 are now pegged at 1.858 billion pounds, up 65 million from August as lower demand for biofuel more than covered the decline in supply. For 2021/22, USDA trimmed 500 million pounds from the biofuel category, on top of the 500 million removed from the estimate in August. Soybean oil is currently a pricy feedstock for biofuel, but the industry expects demand for renewable diesel to continue rising steeply. USDA increased 2021/22 soybean oil use for food/feed/other industrial by 300 million pounds from August, but at 13.700 billion, use would still be down 7 percent from 2020/21 and barely higher than 2019/20. It feels like there is room for further increases in this category.

Friday’s report may have provided support to soybean futures, which have generally been on the slide since mid-August as the market expected the crop to be higher than the August forecast. Nov-21 soybean futures are trading above $12.90. Resistance may be found around $13.00, however. 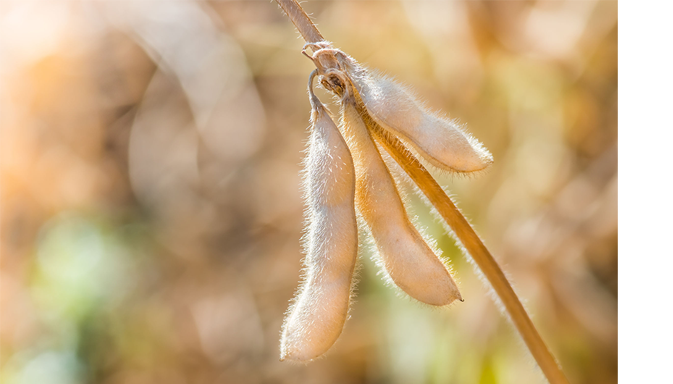