In November 2021, the U.S. levied varying levels of anti-dumping duties on our top honey origins, effectively choking trade from Vietnam, Argentina, India, and Brazil. Imports of raw honey in November totaled 8,933 metric tons and fell to 6,271 MT in December, compared to more usual volumes around 15,000 MT.

Importers increased volumes ahead of November—imports in August set a monthly record at 30,225 MT—which allowed cumulative 2021 honey imports to post a 12 percent gain over 2020.

The U.S. trade commission found credible evidence that low-priced honey from Vietnam, Brazil, Argentina, India, and Ukraine was harming our domestic industry. Of the top four suppliers to the U.S., tariffs imposed on Vietnam were especially harsh, at over 400 percent. Duties imposed on honey from Brazil and Argentina range from 8 percent to 30 percent and from 8 percent to 49 percent, respectively. India’s honey exporters received the lowest assessment, at around 6.5 percent.

It will take some time for U.S. honey producers to significantly increase domestic supply, which ranged between 147 and 157 million pounds annually from 2017 to 2020. During that time, honey imports averaged 435 million pounds per year.

While trade partners appeal these duties through various channels, U.S. honey importers will look to other origins, such as Uruguay, Mexico, and Canada. However, replacing the volumes formerly supplied by countries now under tariff will not be an easy task: Vietnam alone has supplied 20 to 25 percent of U.S. honey imports since 2013.

Vietnam has always been our lowest-priced origin for honey: The CIF value of imports has historically been below 70 cents per pound, although prices for most of 2021 were higher, averaging 83 cents per pound during May through November. U.S. demand allowed Vietnam to increase its exports to the U.S. from 33,586 MT in 2013 to 56,172 MT in 2021. Vietnam traditionally exports nearly all its honey production to the U.S., and the stiff duties will be hard for the industry there to weather. 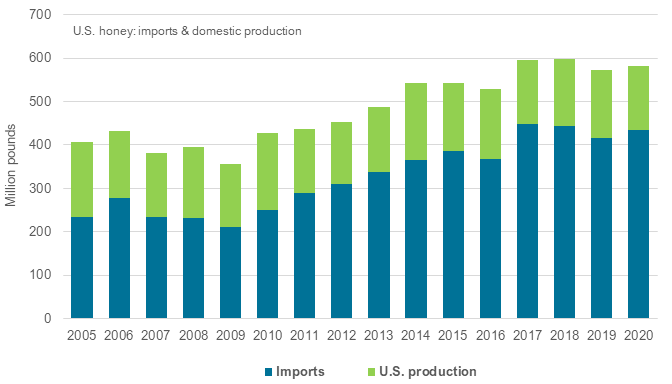 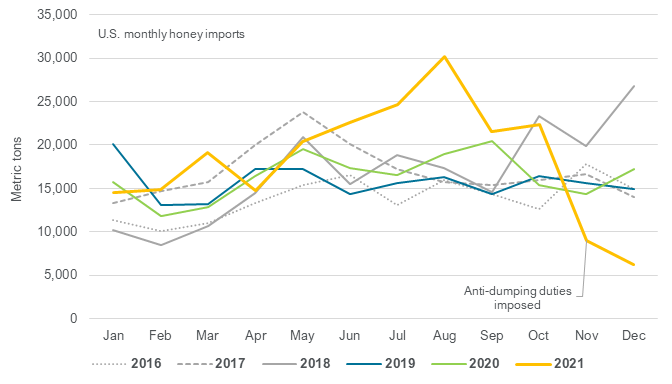 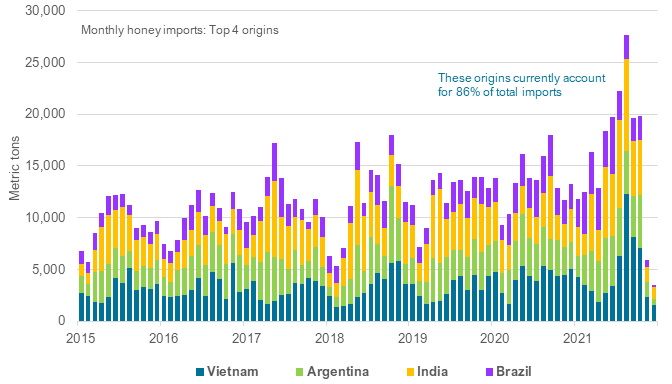