As of Aug. 8, North Dakota’s spring-planted canola crop was developing faster than average pace, with 77 percent of the crop’s seed pods at the coloring stage, compared to the five-year average of 74 percent, and well ahead of last year’s 62 percent. After an extremely hot, dry growing season, the crop’s condition is poor, however: Just 18 percent of the crop was rated good to excellent, whereas a year ago 73 percent of the crop fell in the top two ratings.

While U.S. imports of crude canola oil have steadily trended lower for years, demand for imported refined oil continues to show modest growth, as our domestic production doesn’t meet consumption. Canada is the U.S.’s top supplier of crude and refined canola imports, and growers there were hoping this year to capitalize on expanding world demand for edible oils and oil meals. Unfortunately, the same conditions that have hurt North Dakota’s crop are being felt in Canada.

In July, USDA cautioned that 2021/22 Canadian canola production may be 300,000 MT lower than initial expectations and warned about further reductions should the drought continue—and recent precipitation has not materially improved yield prospects. Harvest is expected to progress rapidly, though, meaning the crop should not be at risk of freeze damage. As things stand, Canada is still expected to produce around 20 MMT of canola seed in 2021/22, and if this volume is realized, crush could be near 10.25 MMT, down just 1 percent from 2020/21. 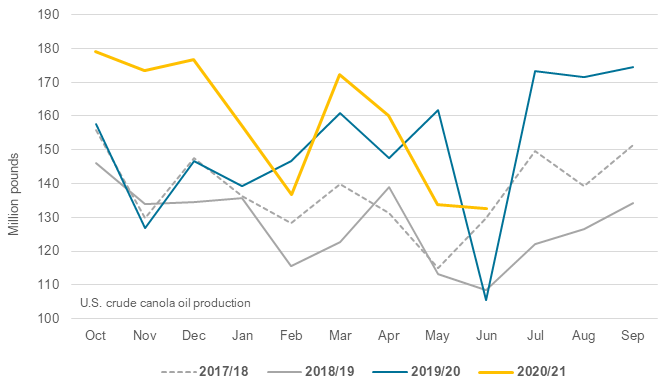 U.S. crude canola oil production vs. use of refined oil 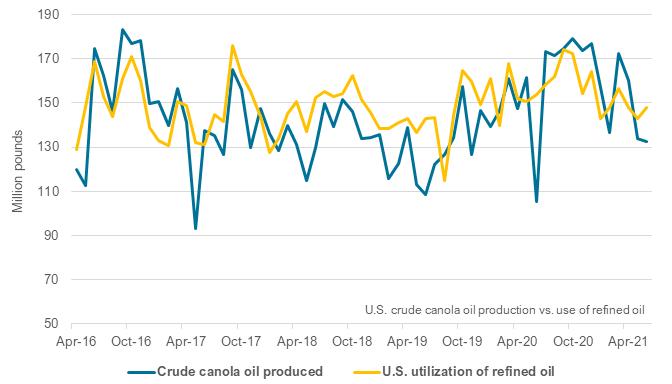 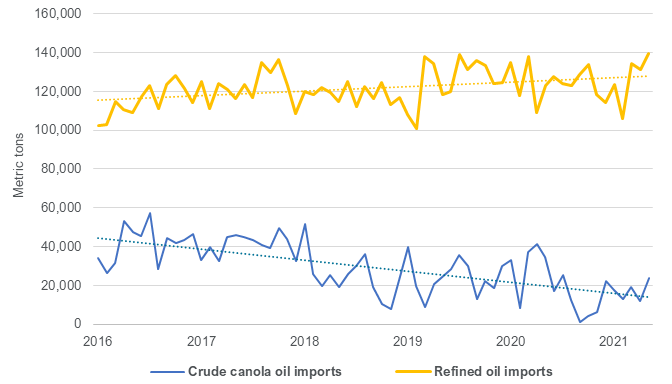