Interest rates were increased by 50 basis points in an early-May Fed meeting, and there was strong insinuation the move would be followed by another hike of 50 points at the June meeting and perhaps several more later this year. Higher yield is attracting investors, causing the dollar to surge to a two-decade high against a basket of other commodities.

Specifically, the U.S. dollar has appreciated 10 percent since the start of this year. From the start of 2021, dollar’s value is up closer to 16 percent. Investors have not only been chasing anticipated higher interest rates, but risk appetite has shifted to weaker equity markets and the Russia/Ukraine war is causing capital flight to safe havens such as the dollar, which has been the global reserve currency for decades.

The appreciation of the dollar is most notable against the Japanese yen, trading at a twenty-year high, and the euro, where some are even talking about a parity valuation (1 USD to 1 euro) by this summer if the dollar strength trend continues. So, what does all this mean in the context of global commodity prices?

For starters, many of the world’s primary commodities (crude oil, gold, corn, sugar, and dairy ingredients, among other things) are traded as derivatives on global commodities exchange markets and denominated, or priced, in U.S. dollars. Although many of the buyers and ultimate destinations of these commodities are in countries and markets that transact in another base currency, the value of these goods and their trade-in in dollars.

If the value of the dollar increases, the buying power of these foreign traders as measured in their base working currency has diminished. Funds in their base currency are worthless when converted into U.S. dollars, meaning they will not be able to purchase as much without paying more of their home currency to compensate for the inflation of the dollar. Ultimately, these buyers are facing the double impact of a surge not only in commodity prices but also in dollar appreciation compounding the impact of inflation. We are already seeing demand cool as global fears of economic slowdown and recession start to creep into the everyday conversation Examples include lower prices for gold, cocoa, and dairy. 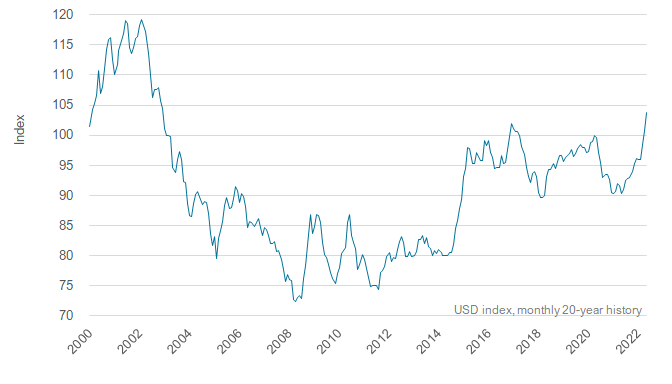