Sizzling summer temperatures sent the mercury well into the 90s for regions of the U.S. over the past week, boosting demand for power as air conditioners were working overtime. The Twin Cities saw seven consecutive daytime highs well into the 90s, and much of the East Coast also baked with many cities vying for record highs for the month of June. Large parts of the Midwest from Bismark to Chicago were 10 degrees above average as peak cooling demand came earlier this year than usual.

We are not yet in the hottest months of the year (July and August), so this early start to extreme temperatures is increasing anxiety in the energy and natural gas markets. Traders have been watching both rig counts and weekly extraction rates to formulate a forward view of supply. Export demand has been growing for both pipeline flows to Mexico and LNG shipments, and when combined with domestic consumption, use is proving challenging for extractors to meet, as evidenced by the inventory figures.

This past week’s U.S. Energy Information Administration (EIA) Natural Gas Storage report showed an increase in stocks of 98 bcf across the country, which was within the range of estimates. All regions of the country managed to report a gain, but two months into the seasonal build, stocks are lagging.

National inventories in underground storage are 13.7 percent below last year at this same time and are also 2.2 percent behind the statistical five-year average. More troubling is the observation that natural gas active rig counts have actually been declining over the past several weeks. The hope had been that higher prices would lead to a boost in active rig counts to meet the demands of the growing export market and higher electricity demand around the country.

Although we are still in the first half of the seasonal build season, it would be nice to see a recovery north of 100+ rigs active across the country. The stall in that recovery will likely underpin prices as we head into the warmer summer months and hurricane season. 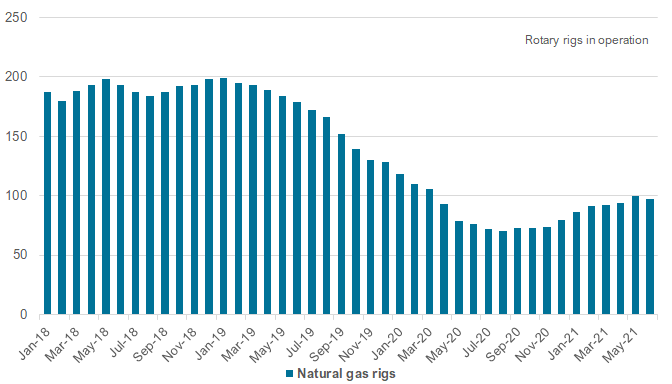