A disappointingly small 13 bcf (billion cubic feet) build was reported in this past week’s EIA natural gas storage report. An exceedingly hot summer season across the U.S. has seen demand for electricity for air conditioning spike along with use of gas by power plants. National rig counts seem to be stalled out near 100, plus or minus five, since spring. Although that is a significant improvement, up by a third over last year’s count at the start of Q3 2020, counts seem to be rising too slowly to keep up with increased domestic and export demand.

For the last week of July, working stocks of gas in storage actually declined in four out of seven regions despite an increase of 13 bcf nationally. However, this build was nominal, and we should be putting more into underground storage ahead of the winter season. The only increases were registered in both the East (up 21) and Midwest (up 17), even though we did see a small increase to 2,727 bcf nationwide. 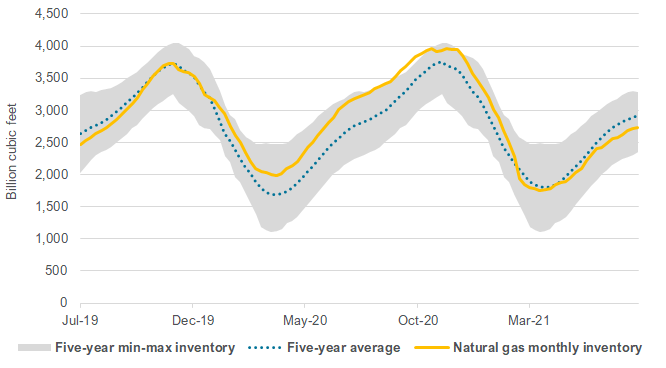