Stocks of NFDM weigh on futures

Stocks of U.S.-produced NFDM rose steadily through the first half of the year and are now up almost 10 percent YOY. Likewise, inventories of other dried dairy proteins are the highest in years as buyers have throttled back aggressive inventory builds ahead of what may be a deteriorating economy in 2023.

Whey stocks are up 17 percent, WPC up 1.6 percent, and WPI up 10.5 percent. Chicago NFDM futures have breached $1.40 per lb, and most months are now trading around $1.36 per lb. We could see a further softening in prices after New Year’s, when weight-loss resolutions and diets reduce demand and school winter holidays divert more milk to drying plants, further bolstering supply.

As 2022 winds down, the herd now stands at 12-month highs, and record yields in milking parlors should see monthly milk output rise significantly in the months ahead. Compounding that situation, the U.S. dairy industry has just passed the ebb point of production and will be ramping up output as flush approaches at the end of Q1. Dairy farms would seemingly need to cull aggressively to avoid oversupply, but that seems likely given the continued expansion observed in the most recent milk production report.

The total U.S. herd grew by 7,000 more head in the most recent report, including the 1,000 head jump from the prior month as well as a revision to the last month’s numbers. Although prices are at 2022 lows, the market will likely be vulnerable in months ahead due to increased production, lower exports, and uncertain demand. A critical statistic to watch in the coming months will be the volume of NFDM put into storage around the country. 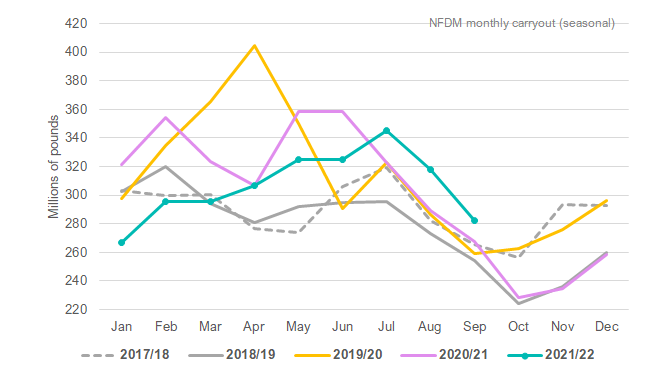