Stevia is a sugar substitute that is about 100 to 300 times sweeter than conventional table sugar. As a high-intensity sweetener, stevia is used in very small quantities and therefore doesn’t add calories to food or beverages containing it. It is derived from the leaves of the stevia plant, which is native to the South American countries of Argentina, Brazil, and Paraguay. The leaves of the plant have been used for hundreds of years by indigenous peoples of the region for its health and taste benefits, and nowadays you may find stevia-containing products like soda and candies in your nearest grocery store.

Part of the reason that stevia is becoming more popular is that obesity and diabetes remain as severe health problems across the world, propelling the need for sugar substitutes within sweet consumables.

Apart from being a high-intensity sweetener, stevia is said to contain properties that may help with weight loss, control diabetes, and lower cholesterol levels, although refined stevia-derived sweeteners may lose some of these assets. Much of the sweetness of stevia-derived products comes from the Rebaudioside-A compound, which is said to be 200 times sweeter than table sugar. In 2008, the FDA approved Rebaudioside-A, in its purest form, to be used as a food ingredient. The compound can be used as a substitute for sucrose to sweeten baked goods, drinks, and other confections.

Despite these potential benefits and being a no-calorie sweetener, taste is still an obstacle to consumer acceptance of stevia. In a small, very unscientific taste test, I found that cola-flavored stevia soda is way too sweet for my taste, seeming to be about three times sweeter than ordinary cola. Many food and beverages manufacturers have taken to blending stevia with sugar, allowing for lower sugar content in a product but minimizing the impact on taste. Most consumers expect products to taste good whether they are natural or not, giving way to a variety of different products that try to capture the growing natural sweeteners market. 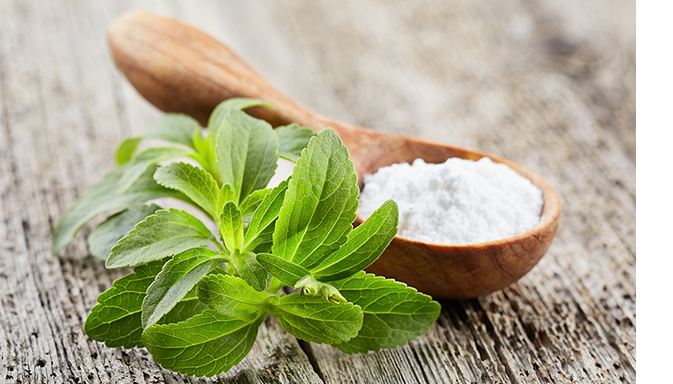