Three weeks ago, speculative fund longs in cocoa surged, sending their total net position up just short of 50,000 net longs. At 48,301 net contracts, this is the longest these traders have been since March earlier this year. They raised their longs by some 22,000 contracts, a bigger accumulation than the market expected. Price action in the terminal market shows feverish buying by the funds as prices advance to calendar-year highs.

The most recent Commitments of Traders report shows that large speculators took profits and pared their position. For the week ending Oct. 12, funds sold a modest 3,000 lots. It’s hard to say what served as the catalyst for the fund buying and entry into cocoa segment: Perhaps it was slowing arrivals in the tail of the midcrop due to dry weather back in spring. Or perhaps it was announcements from both Ivory Coast and Ghana forecasting smaller crops in the upcoming season. Regardless of the reason, many commodities are experiencing a bull cycle for prices as demand increases around the globe.

Third-quarter grinds were published this past week for the major reporting regions. Western Europe led the pack with stronger-than-expected growth of 8.7 percent, bringing grind growth for the largest consuming region to 3.7 percent for the entire crop year. This was substantially above forecasts, an encouraging sign as demand for chocolate returns.

North America followed with a solid Q3 gain of 4.3 percent YOY, though that number was slightly lower than some had anticipated. Asia was the last region to report, with similar growth to that of North America at 4.1 percent. This was again slightly below analyst expectations, attributed to logistics delays and shipping issues. Overall, market-year growth for the two regions was solid at 6.2 percent for North America and 2.8 percent for Asia.

Together, these figures help bring estimated global grind growth of 3.4 percent, market year (October-September) weighted average, above nearly all analyst estimates at the start of the season. Obviously, the stronger grind result will likely mean the statistical surplus is not as large as many had expected. In fact, with global grind growth at that 3.4 percent for the crop year, a surplus exceeding 200,000 MT seems all but impossible. 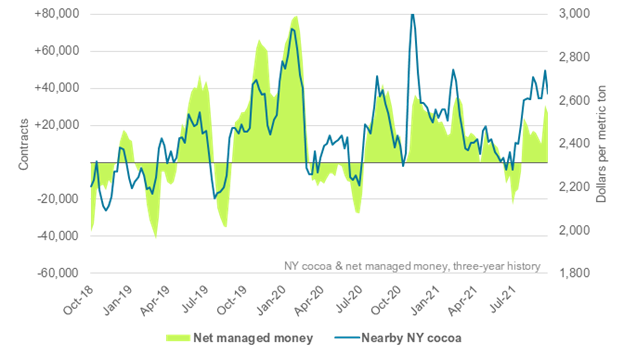