Planting of 2022/23 soybeans remained behind average pace as of Apr. 24 due to a slow start in Illinois and Iowa, which were both just 1 percent planted vs. their five-year averages of 8 percent and 3 percent. Indiana soybean plantings had yet to show any notable progress, compared to the state’s average of 4 percent.

Growers may be prioritizing corn planting, which is also running behind. Indiana, Illinois, and Iowa finally made it on the board with 1 to 2 percent of their estimated corn acreage sown, but a more usual progress rate is between 10 and 20 percent for this time in April. Overall, U.S. corn plantings were at 7 percent vs. the five-year average of 15 percent.

Winter wheat condition seems to be going from bad to worse: As of Apr. 24, 39 percent of the crop was rated poor to very poor, up from 36 percent at the start of the month, and worse condition even than the 2018/19 crop at this point in the season. About 11 percent of the crop had headed, 8 points behind the five-year.

NOAA is forecasting above-average precipitation across the Grain Belt over the next week and below-average temperatures in the northern portion of the region, which may prevent corn and soybean growers from catching up on planting. 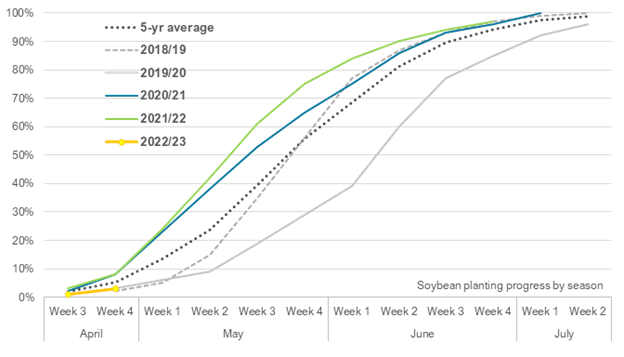