Export sales and shipments of 2020/21 soybeans were both on the low side the week of Mar. 18. Sales were offset by 152,500 MT of reductions for unknown destinations, a slightly higher level of cancellations than we saw over the previous couple weeks. Exports to China declined to just 13,514 MT for the week; other than random weeks of slightly higher volumes, we expect weekly volumes to China to average well under 100,000 MT through June.

Total commitments as of Mar. 18 accounted for 101 percent of USDA’s current projection for the season, compared to the more seasonally usual 85 to 90 percent. Even if exports crawl out of port over the next few months, it still seems like the forecast should be due for an increase, albeit a slight one given tight soybean stocks. 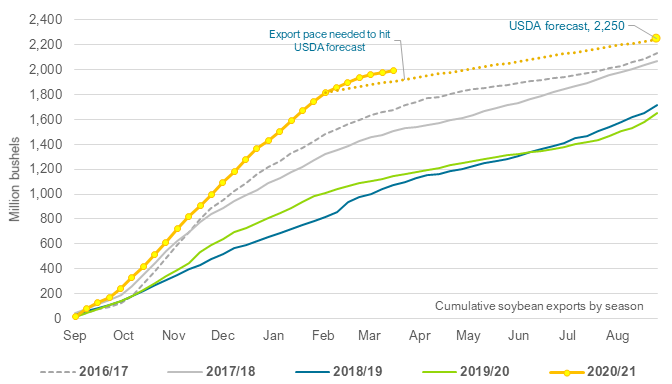