NOPA members crushed a smaller volume last month than expected, as February’s storms may have limited the month’s processing hours. Analysts were expecting crush to be closer to 169 million bushels, slightly higher year over year in keeping with growth we saw in Sep-Jan. Although crush missed expectations, it was still the second highest volume for the month.

Soybean oil stocks were close to 1.76 billion pounds, down about 41.6 million pounds from January but around the average level we’ve seen for February since 2016.

USDA increased projected 2020/21 domestic soybean oil disappearance by 200 million pounds, to 15.2 billion, in the March WASDE on expected higher use in the food sector this year. Forecast use for biodiesel was unchanged at 8.3 billion pounds. 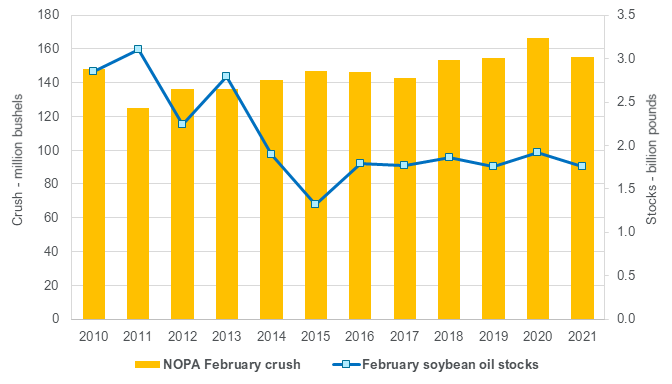