Slight dip in the condition of field crops

Around 90 percent of the U.S. corn crop had made it through pollination as of Aug. 7, although Iowa was still behind average at 83 percent vs. 92 percent for the five-year. July’s hot, dry weather hurt crop condition in some regions, with 16 percent of U.S. acres rated poor to very poor, up 2 points week over week, and 58 percent rated good to excellent, down 3 points. Nebraskan corn was rated 18 percent poor to very poor compared to 13 percent at the low end a month ago.

Most of the U.S. soybean crop has bloomed, and 61 percent of soybeans have set pods, close to the five-year average pace. Minnesota is notably behind average at 60 percent setting pods vs. 77 percent for the five-year. Overall condition is slightly better than last year to date, but the good-excellent portion of the crop lost a point compared to the previous week, at 59 percent as of Aug. 7 vs. 60 percent as of Jul. 31.

Harvest of winter wheat is wrapped in Kansas and close to complete in other top states. The spring wheat crop is also being harvested now, although progress will be slow given the significant delay in planting North Dakota’s crop this year. About 9 percent of spring wheat acres had been harvested as of Aug. 7 vs. the five-year average of 19 percent. The spring wheat crop is in much better shape this year—64 percent was rated good to excellent as of Sunday compared to just 11 percent a year ago—but recent weather left its mark with a 6-point week-over-week drop in the good-to-excellent portion. 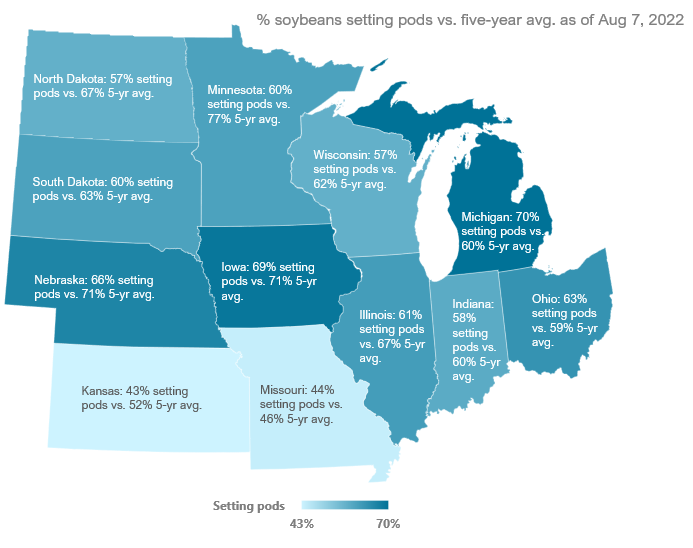