In April, FAO’s Food Price Index (FPI) fell slightly from March, possibly a positive sign after strong food price inflation in previous months. Adjusted for inflation, the FPI was 121.8, down about 0.8 percent from prices in March. The FPI was still up 28 percent YOY, supported by appreciation across all subindexes.

April’s decline followed month-on-month increases of 4 percent in February and 13 percent in March. Year to date, the average 2022 FPI has been up 16 percent from the 2021 FPI. Unsurprisingly, the indexes that have seen the largest YOY gains, vegetable oils, and cereals, were those that retraced slightly lower in April.

The subindex showing the strongest YOY growth to date is vegetable oils, up 44 percent YOY. Per FAO, some declines for palm, sunflower, and soybean oil world prices helped the oil index fall nearly 6 percent from March despite appreciation for rapeseed oil price offers. Moves by Indonesia to reduce or block palm oil exports could add further bullishness to the market, naturally, but high prices seem to be prompting some demand rationing.

Like the oils index, the Russian invasion of Ukraine had fueled appreciation for cereals, though that index also fell in April, down almost half a percent from March. The index had risen over 3 percent in February and 17 percent in March.

The sugar price index appreciated most strongly in April, up over 3 percent from March. The main prominent driver for the rise in world sugar prices is the continued expectation of heightened diversion of Brazilian sugarcane to ethanol. The market, too, believes that sugar use growth will be resilient in the medium term. 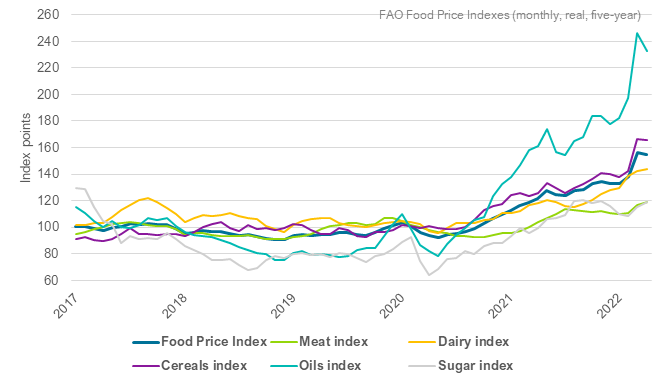