Soybean crush declined seasonally in September, although the dip was somewhat greater than analysts expected. NOPA members crushed 158.1 million bushels of soybeans last month, up 3 percent from September 2021 and just above the average for the month we’ve seen since 2017/18 (when marketing year crush expanded notably). Ahead of today’s report, though, the average of expectations put crush above 161.5 million bushels, surpassing the September record set in 2020. Today’s NOPA numbers pushed soybean oil futures higher. 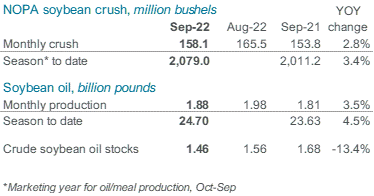 USDA is anticipating 2022/23 crush to be the largest to date at 2.235 billion bushels, but this volume is up just 1 percent from 2021/22 and may not be sufficient both to meet U.S. soybean oil demand and allow market pricing to ease.

Soybean oil production came in just under 1.88 billion pounds, up 3.5 percent YOY. Oil yield averaged 11.87 pounds per bushel in September, a strong value even if it was a six-month low among 2021/22’s season of extraordinary yields. Oil production was down 106.3 million pounds from August, however, the main driver of the 7 percent month-on-month decline in oil stocks. At 1.50 billion pounds, September soybean oil stocks were at their lowest level in two years but not unusually low for this point of the season. 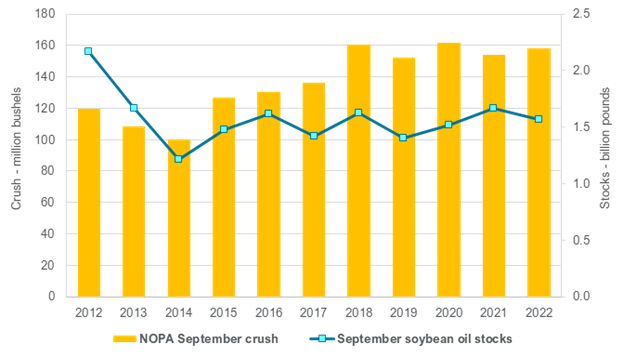