Bunge expects an increase in the capacity of renewable diesel by 2024. The estimation is for capacity rising to about 5 billion gallons. The U.S Environmental Protection Agency announced that oil refiners should include 20.82, 21.87, and 22.68 billion gallons of biofuels in 2023, 2024, and 2025, respectively, meaning that renewable diesel could soon account for a significant share of total biofuel utilization.

In November 2022, USDA recorded 5.7 million tons of soybean crushed, a 3.6 percent drop from the preceding month (5.9 million tons). With that crush volume, 2.2 billion pounds of crude oil were derived, representing a decline of 6 percent from October 2022.

Soybean oil removed from stocks for inedible use 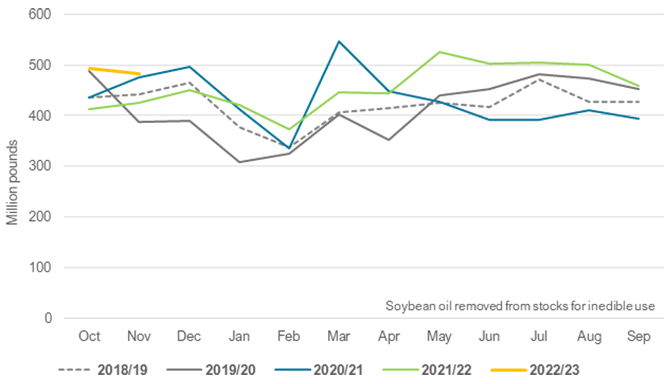