The September Grain Stocks report showed 2021/22 ending stocks for corn at 1.377 billion bushels, down 148 million bushels from the estimate in the September WASDE. The corn futures market responded vigorously, rising to a high of $6.9625 per bushel.

USDA lowered 2021/22 corn production by 41 million bushels, due to modestly lower yield (176 bushels per acre instead of 177.0 bpa in the September WASDE) and slightly smaller harvested acreage (85.3 million vs. 85.4 million). That means another 100+ million bushels were consumed during the marketing year than USDA expected as of September, perhaps in the feed category. Ahead of the report, analysts expected ending stocks to be around 1.5 billion bushels, a bit lower than the September estimate. The double whammy of lower production and higher use came as a surprise.

The report was closer to expectations for soybeans and wheat but still offered direction to the markets. Soybean stocks for 2021/22 were placed at 274 million bushels, up 34 million bushels from the September WASDE number due to a 30 million bushel increase in production (higher yield). The market had expected little change in soybean stocks today, so the increase at first dipped the November soybean contract to a low of $13.7750, and it is currently trading around $13.89, down 22 cents from Thursday.

USDA estimated all wheat stocks at 1.776 billion bushels as of Sep. 1, compared to 1.774 billion last September and 1.793 billion expected by the market. USDA also pegged 2022/23 wheat production at 133 million bushels below the August production estimate. Missing the stocks expectation today may be leading to more pessimism about the 2022/23 crop. Dec-22 wheat futures are currently trading around $9.45 per bushel, which would be the highest close for the contract since late June. Wheat prices already felt like they were making moves toward $10 per bushel, and today’s report will certainly help get the market there faster. 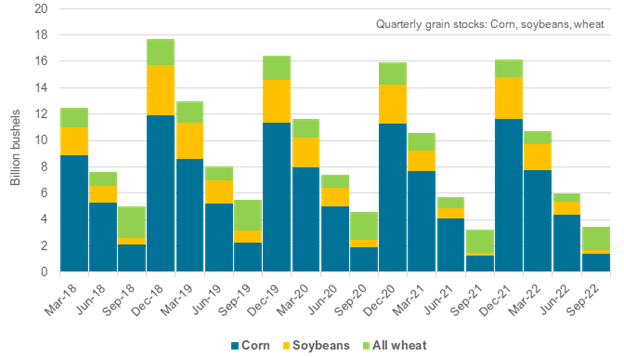