Stocks of non-orange juice concentrates at the end of August were just 276.4 million pounds, nearly unchanged from July and the lowest level for the month since 2015. In common with other imports coming into the U.S., Gulf access for apple juice (the largest source of non-OJ juice stocks in cold storage) has been impacted by damage from Hurricane Ida and by heavy congestion at other ports.

For apple juice, though, decent volumes in June and July did not offset low levels in previous months: Jan-Jul 2021 imports of 212.3 million SSE gallons were down 23 percent YOY. Demand for grape and pear juices, while just a modest fraction of that for apple juice, appears to be on the rise, and cumulative 2021 imports were up 17 and 7 percent, respectively, from 2020. 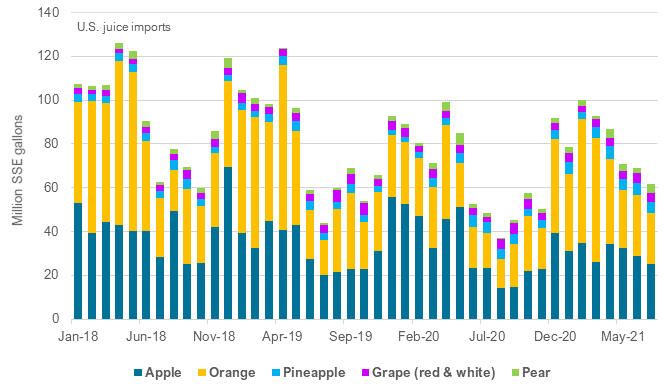