Intensified upwelling in the equatorial Pacific is bringing unusually cold sea surface temperatures, part of the cold event known as La Niña. Although the exact atmospheric mechanics are not fully understood, these colder surface temperatures are generally associated with drier growing conditions across South America—now well into its summer growing season—and unusually mild winters for the continental U.S. This is also correlated with a buildup of warmer ocean temperatures across the western Pacific that can boost convection and thus rainfall across southern Asia, which may benefit crops such as palm, rubber, and coconut.

The western U.S. saw drought conditions this past summer, but now Brazil, Paraguay, Chile, and Argentina are experiencing similar drought, with river levels, such as the Paraná’s, dropping to the lowest recorded levels since 1944. Water scarcity is impacting ranchers and farmers alike, with insufficient water for livestock and for irrigation, cutting yields for crops like sunflowers by 65 percent. Low reservoir levels in Brazil are crimping hydroelectric power generation, while Bolivia has lost millions of acres of forest to wildfires over past seasons. The Chilean government recently declared an agricultural emergency in half its regions and is extending aid to farmers.

Timing of any beneficial rains will become increasingly important through the second half of the South American growing season and into harvest. Crops such as corn and soybeans need sufficient moisture to reach reasonable yields as kernels and beans fill out and develop into mature harvestable crops.

In the Northern Hemisphere, cooler ocean temps are typically linked to a winter season that is drier and warmer than normal across the southern U.S. and colder and wetter closer to the U.S.-Canada border. This is attributed to a flattening of the jet stream that shifts the North Pacific high-pressure area, influencing the movement of weather descending from western Canada.

We have already seen a series of weather systems bring much needed rainfall to California and the Pacific Northwest. Condition in the eastern half of the country and the deep south have been very mild, with warm and dry weather prevailing. So far, this has brought about a significant correction lower in natural gas prices due to light winter-strip hearing demand, presenting an excellent hedging opportunity for those who were under-covered. The steering pattern of La Niña may actually help create a ridge blocking polar vortexing and preventing cold arctic air masses from descending—but it’s still best to keep that snow shovel handy, just in case… 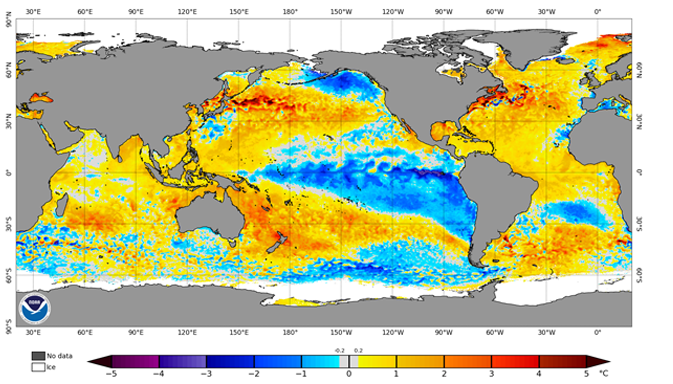