NOPA May soybean crush up 5% YOY

NOPA members crushed over 171 million bushels last month, up 1 percent from April and setting a new record for the month. Oil yield was especially strong, which allowed oil production to post a 6 percent year over year gain in production.

Industry watchers had anticipated slightly stronger crush for May, at around 171.5 million bushels, but several plants were still idled for maintenance. USDA maintained its 2021/22 soybean crush projection at 2.215 billion bushels in the June WASDE, indicating that this summer’s processing activity should be strong and well above last year’s pace, which fell below expectations during Jun-Aug.

NOPA soybean oil yield was 12.0 pounds per bushel last month, an unusually high level. Looking back over 20 years, such a strong yield was achieved only once before, in September 2000. At this rate, processors saw oil production increase almost 2 percent from April and over 6 percent YOY. 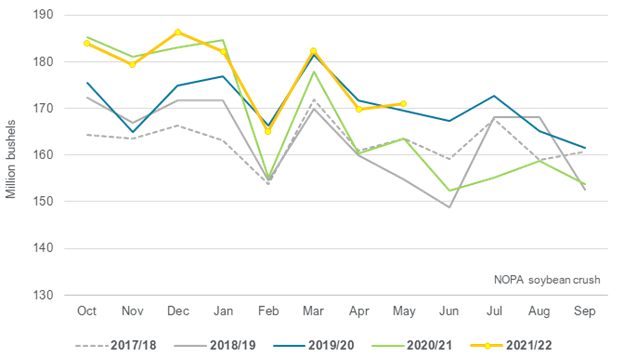