For the first time this year, natural gas storage underground reached 2021 levels and seems set to catch up with the five-year average. Atypically warm weather across much of the eastern U.S. during October and the first half of November allowed a greater build this fall.

Inventories reached 3,644 billion cubic feet (Bcf), a net change of 64 Bcf in the latest EIA natural gas report. This brings total inventories across the country up 0.1 percent from 2021 and just 0.2 percent behind the five-year average from 2017 to 2021. Clearly, warmer weather allowed gas producers to inject more underground this fall—ahead of an expected change in direction as temperatures cool. Having the Freeport Texas LNG terminal on the sidelines no doubt helped the stocks-build.

It has been over a year since working gas inventories have been at or the previous year’s levels. As the Freeport facility goes back online, consumers should feel reassured that safety stocks are in place ahead of colder winter demand and any subsequent drawdowns.

NYMEX prices for nearby natural gas have corrected 40 percent lower since peaking in Q3, and the gradual climb in inventories may explain why prices have been unable to sustain a recovery even as winter approaches. Weather is now shifting as the first major snowfalls of the season are expected this week along the Great Lakes and in other parts of North America.

With temperatures lower, snow across the northern states, and the Freeport facility ready to go back online, the EIA stocks trend will likely turn negative by the first week of December, which could inject some volatility back into the market, especially as we move into the winter strip months (November through March). 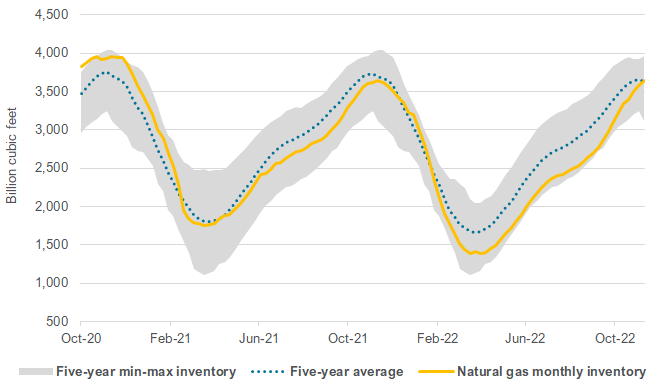