Natural gas back near 14-year highs on Europe heatwave

Intense heat across Europe is boosting demand for electricity, and drought-stricken areas are dealing with low water levels in rivers hindering barge deliveries of coal to power plants. Higher air-conditioning use is preventing a buildup of natural gas stocks ahead of winter, and storage has only reached 75 percent capacity.

Meanwhile, Russia appears to be further retaliating against continued European support for Ukraine by curtailing natural gas exports via the Nord Stream 1 pipeline, now delivering 20 percent of its rated capacity. Nord Stream 1 operator Gazprom announced recently that production is down 13 percent YTD. Traditionally, Europe is one of Russia’s primary and most lucrative export market, so the drop in exports presumably comes at a significant cost.

Russia has had to turn to both China and India as alternate energy destinations and offered discounts to move volume. There’s now genuine concern over whether EU inventory levels will be rebuilt before the weather turns colder. There’s also growing apprehension that Russia might completely halt all exports of gas to European countries that still depend on some Russian gas.

Multiple European countries are developing plans to limit or curtail current gas use to conserve it for what may be an especially cold winter. Germany is expected to delay closure of three nuclear power plants and has also fired up some older coal plants to supplement its total electricity supply. Meanwhile, low water levels across France are limiting energy production from nuclear reactors in that region.

Gas futures rose above $243, up 20 percent this week alone. Prices reached a yearly high in the U.S., closing at $9.37 per million BTU on Aug. 16. Many power-hungry industries, such as steel, glass, and smelting, are idling plants to avoid higher costs that they cannot pass on to contracted consumers.

Australia recently announced limits on LNG exports to long-term contracted customers—plus no spot orders—to preserve supply for its domestic market. There’s optimism that the U.S. will resume exporting LNG via Freeport, TX to Europe come October. However, the drop in industrial output will very likely push Europe further toward a recessionary period as GDP falls. The low injection rate in this past week’s EIA natural gas inventory weekly report (18 Bcf) also added to the tense mood of buyers. 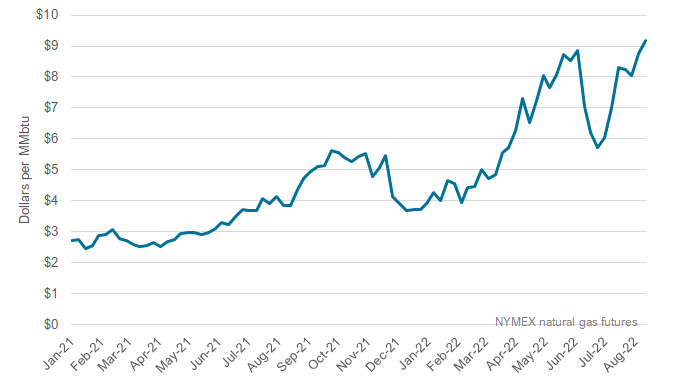