Farmers in the Corn Belt took advantage of better weather and made enormous progress last week in planting corn and soybeans.

Iowa’s planted corn acreage rose from 14 percent to 57 percent as reported in the May 16 crop progress bulletin, while Illinois went from 15 percent to 55 percent, Indiana from 11 percent to 40 percent, and Minnesota from 9 percent to 35 percent. All major producers are still significantly lagging their five-year average plantings, which are closer to 70 to 80 percent complete by this time of year, but this progress is heartening.

Minnesota spring wheat growers made very little planting progress: Just 5 percent of acreage was planted compared to the five-year average of 75 percent and last year’s rate of 99 percent. Top HRS wheat grower North Dakota also has a lot of land still to plant, at 17 percent complete as of mid-May vs. the state’s five-year of 60 percent.

The central and northern portions of the Grain Belt are forecast to see average to cooler-than-average temperatures over the next week and average precipitation.

Winter wheat condition was a bit worse as of Sunday, with 24 percent of the crop reported to be in very poor shape, up from 21 percent the previous week. A punishing heatwave is forecast next week to extend up from the southeast into Oklahoma and Kansas, meaning crop condition could worsen further. The winter wheat crop was 48 percent headed as of last week, slightly behind average pace. 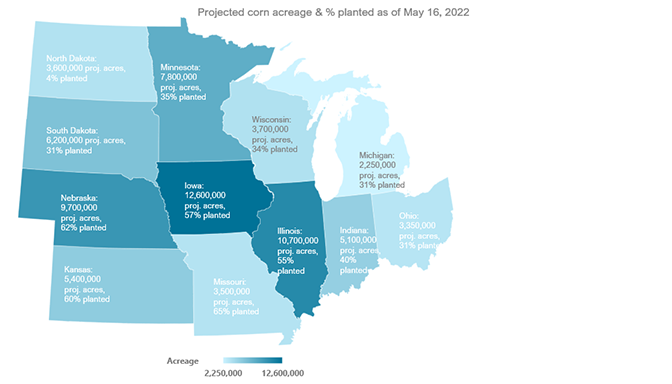 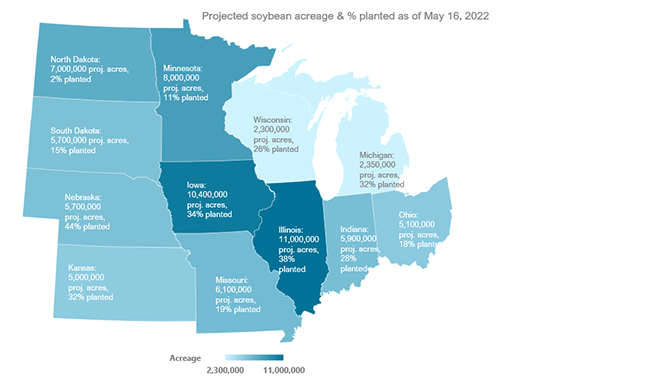