In early 2020, before the pandemic upended things, Mexico seemed to be on track to import usual volumes of high fructose corn syrup, at least of refined-sugar-substitute HFCS-55, used mainly in soft drinks. The U.S. had already abandoned earlier (circa 2012) hopes of robust demand for HFCS-55 in the Mexican market, due to consumer preference for sugar over HFCS and government taxes on junk foods, but demand seemed to be supportive of around 800,000 metric tons, dry basis, of annual HFCS-55 exports, especially with the rise in Mexico’s domestic sugar pricing.

Social distancing measures, however, did more to reduce consumption of calorically sweetened beverages than Mexico’s tax on such drinks, as lower demand for soda in the restaurant and hospitality sectors was reflected in almost no growth YOY in the beverage tax’s revenue. In the U.S., we saw that HFCS-55 shipments to Mexico totaled only 723,000 MT, dry basis, in 2020, the smallest annual volume since 2009.

HFCS-55 exports in 2021 are even lower than last year: Jan-Aug shipments were less than 450,000 MT, down 7 percent year over year. Mexico’s imports were especially weak during Feb-Apr, possibly in line with lower tourism bookings during spring, and again turned sharply lower in August.

A rebound in tourism should boost demand for calorically sweetened drinks like soda, but retail sales in Mexico also show higher demand for lower-sugar and no-sugar offerings. 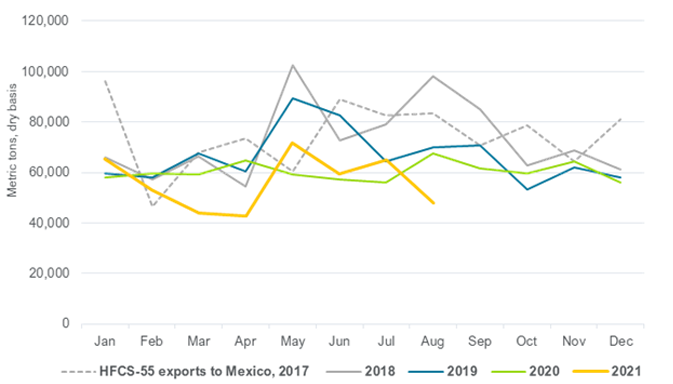