Mexico placed orders for a net 919,837 MT of corn during the week ending Nov. 10, the highest weekly net for this season to date. Outstanding sales to Mexico ended the week at 4.8 MMT, down 17 percent year over year; during the previous two weeks, outstanding sales were down 30 percent YOY.

The increase in Mexico’s market activity was the primary reason U.S. net export sales hit 1.17 MMT for the week of Nov. 10. Mexico was also the primary destination for weekly exports (265,300 MT), while another 206,400 MT were shipped to China.

Cumulative exports to Mexico were 2.17 MMT, down by a third from the same week last year. Mexico has been holding off purchasing U.S. corn because it is seeking to ban genetically modified corn by 2024 (although last week’s sales indicate the need to secure supply). The proposed ban is currently causing a lot of confusion because some Mexican officials have said that corn used for feed would not be included under the ban, but the language of the law does not yet clarify this. Mexico has also stated that it would like to contract directly with U.S. farmers to grow non-GM for the Mexican market, a new and potentially burdensome bureaucracy for both farmers and exporters.

USDA is forecasting Mexico’s total 2022/23 corn imports at 17.7 MMT, up about 1 percent from last season. The U.S. usually supplies at least 90 percent of Mexico’s corn imports, and if USDA’s current forecast holds true, U.S. exports to Mexico would be expected to end up close to 16 MMT. However, Mexico’s total commitments were 6.97 MMT as of Nov. 10, or 44 percent of that theoretical U.S. total compared to a more usual commitments’ share of over 50 percent. At this point, admittedly early in the season, Mexico is on track to import something closer to 14.0 MMT from the U.S. 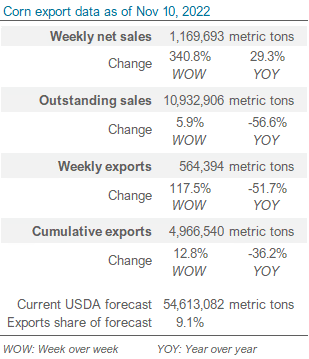 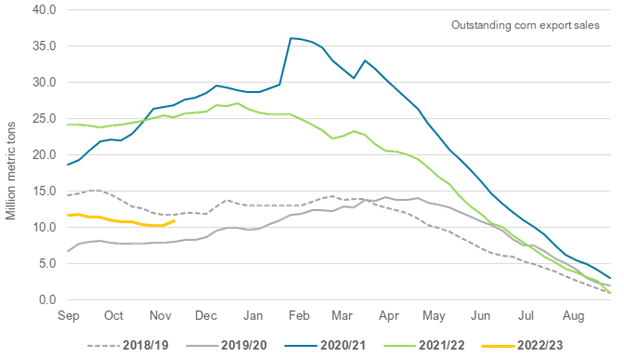