In a short-term rally, benchmark May-22 NY cocoa reached a three-week high of $2,683 last week. The contract fell from last Friday to this Tuesday to two-week low of $2,522, testing but failing to close below the lower Bollinger Band and psychological and retracement support near $2,500. The contract rebounded slightly in an inside session Wednesday.

RSI is neutral. MACD attempted but rejected a bullish crossover and is now modestly bearish. The stochastic saw a bearish crossover.

In the last reported week, noncommercials trimmed both longs and shorts in NY cocoa, raising net noncommercial length from a four-week high seen in the week prior.

May-22 London cocoa rose to a three-week high last week above £1,800 after a short-term rally, giving back most of its gains in the last four sessions to reach a nine-session low Wednesday. The stochastic saw a bearish crossover, and MACD may follow suit. 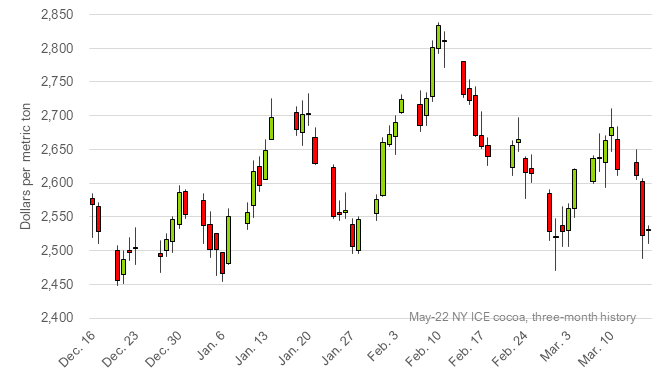