NOPA processors crushed 181.8 million bushels of soybeans last month, up 10 percent from February and up 2 percent from March 2021 and surpassing the previous record for March set in 2020 of 181.4 million bushels. Cumulative Sep-Mar crush totaled 1.23 billion bushels, up very slightly year over year. USDA is estimating 2021/22 crush at 2.22 billion bushels, so it seems to be expecting some notable YOY growth in crush during the rest of the marketing year.

Crush was close to expectations before today’s report, although the average of analyst estimates, 182 million bushels, was a bit above the actual.

March crush tends to be strong as processors work through stored supplies to crush as much as possible ahead of plant maintenance, which is usually planned for the second half of the marketing year when soybean availability is lower.

Soybean oil yield was 11.83 pounds per bushel—this season’s oil average yield is the highest since 2012/13. Cumulative Oct-Mar soybean oil production was 12.76 billion pounds, up 2 percent from last season to date. 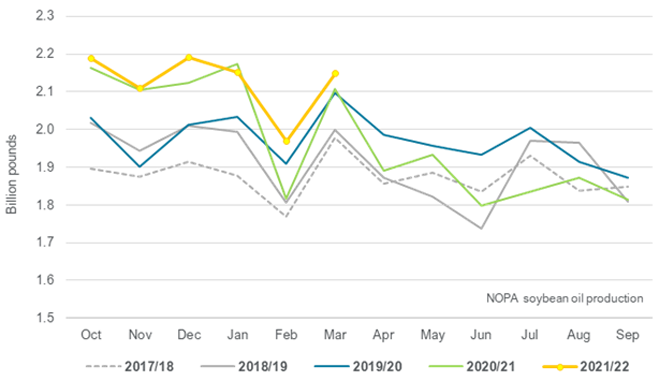