As of Mar. 1, U.S. cattle on feed totaled 12.0 million head, down 1 percent on the month but up about 2 percent YOY. Headcount was a record high for the month of March. This may give some indication of potential feed demand growth ahead of the Mar. 31 Grain Stocks report.

Outside the U.S., China is seeking to reduce its dependence on foreign livestock feed supplies by increasing support for farmers, raising productivity, and reducing waste, per Bloomberg. The Chinese government has reportedly also been releasing a variety of agricultural goods, some past their use for human consumption, to help meet feed demand.

Managing supply of—and dependence on—feed imports for China is difficult as its rising living standards extend to greater demand for meat. China’s agricultural ministry plans to substitute some demand for imported corn and soybean meal with domestic alternatives like rice, wheat, and potatoes.

U.S. cattle on feed by season 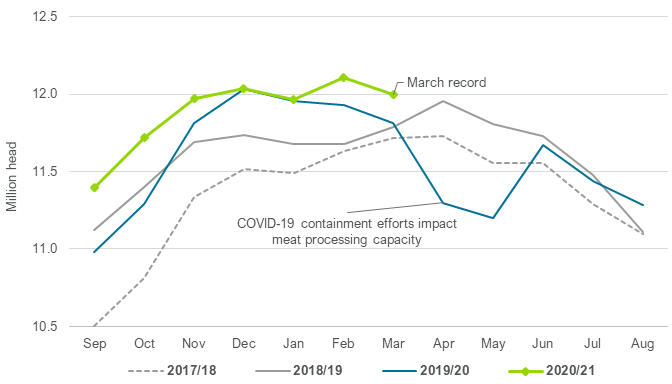