2022 has been marked by repeated USDA revisions by of milking cow numbers. Around midyear, we saw a dramatic upward revision in the herd by nearly 25,000 heifers. Now, we are seeing a revision lower to previously reported numbers. The new numbers show a drop in the total U.S. herd but steadier numbers for the 24-state tally—two series typically move together.

In the August milk production report, the total U.S. herd was 9.427 million heifers, and the 24-state total was 8.928 million. The most September report is revising the previous U.S. total to 9.411 million, down 16,000 head. More importantly, this shows that the herd has been in decline since May, whereas last month’s report showed consistent, albeit modest, growth in 2022.

All the USDA revisions are causing confusion over current herd trends. Worst still, the credibility of the report is perhaps being called into question.
This also begs the question of whether these are the final numbers or if these, too, will be revised further. We suspect that the reported September figures may have been underreported and will likely be changed down the road, though we don’t know for certain.

However, a drop in dairy cows since May seems odd given the strength of dairy product prices. Despite the turmoil in the herd reporting, total milk output has been gaining and as of September was 99.92 percent of the volume a year ago. Total milk production for September alone was up 1.6 percent YOY, and we will almost certainly finish 2022 with higher total milk volumes from last year.

Relatively high dairy prices, dramatically higher freight rates and the incredibly strong dollar will likely crush most export opportunities for U.S.-based dairy farmers for the rest of 2022. Rising interest rates and a growing threat of recession only exacerbate the likelihood that dairy prices are overvalued and in need of a substantial correction lower. 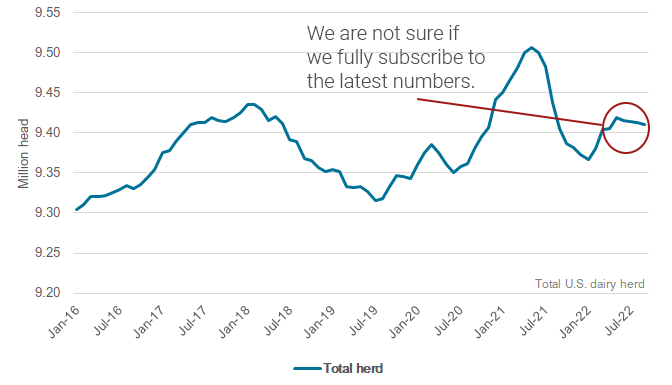