A meeting on Nov. 4 will decide on increasing gas storage at a primary facility that serves as major hub for Southern California. The California Public Utility Commission (CPUC) will vote on lifting restrictions at the Aliso Canyon SoCal citygate terminal as part of ensuring adequate gas supply this winter.

A proposal would raise gas in working storage to either 41.0 or 68.6 bcf (billion cubic feet) by lifting a limit of 34.0 bcf set following a 2015 leak. The new proposal seeks to address supply concerns this winter. California has been in the grips of prolonged drought that has reduced reservoir levels, calling into question the region’s hydroelectric power capacity.

The proposal was announced back in early October and had an immediate impact in the region, causing basis delivery costs to citygate to fall precipitously. At this point, the 41.0 bcf increase already seems priced into the market, but a further increase to 68.6 bcf would likely pressure basis further.

CPUC is proactively taking a position ahead of winter and unknown conditions ahead, trying to avoid any potential emergency and any shortages like those seen in the southern Texas ERCOT region last winter. Residents and environmental activists alike are already aligning to fight the proposed increase, citing the massive October 2015 leak at Porter Ranch in the Aliso Canyon facility near LA. It was the worst such event in reported U.S. history, with just over 97,000 MT of methane/ethane released into the atmosphere. An EIA report last week showed further building of stocks across the country, but next week’s vote will influence the direction of basis and delivery costs in the western region. 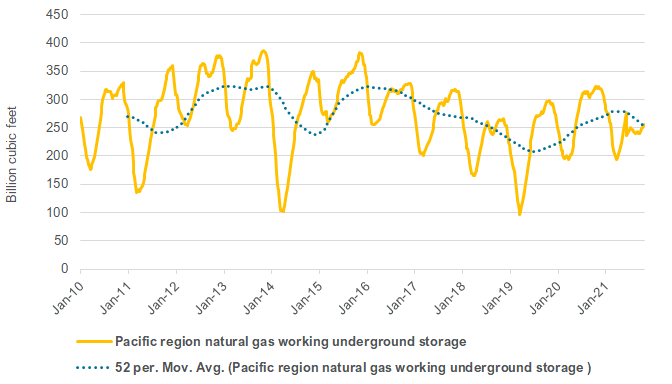