June soybean oil use for biofuel down 11% YOY

Manufacturers of biodiesel and renewable diesel used 663 million pounds of soybean oil in June, down 16 percent from May and down 11 percent from June 2020. Soybean oil accounted for about 44 percent of biofuel feedstock consumption during the month.

We estimate that total feedstock use was down about 2 percent year on year as use of distillers corn oil and yellow grease remained notably elevated. EIA reported use of yellow grease at 290 million pounds, a record volume. Corn oil consumption, at 241 million pounds, was down 6 percent from May’s record but up 156 percent from June 2020. A year ago, availability of both feedstocks was severely limited by COVID-19’s impact on the ethanol and food service industries. This year, demand for both is exceeding trend due to the tight market for soybean oil.

Most-recent information for biodiesel production shows 148.6 million gallons of biodiesel were produced in May, up 10 percent from April but down 2 percent on the year. Biodiesel consumption may have totaled 147.0 million gallons during the month, almost 7 million gallons more than the April volume but down 1 percent YOY. 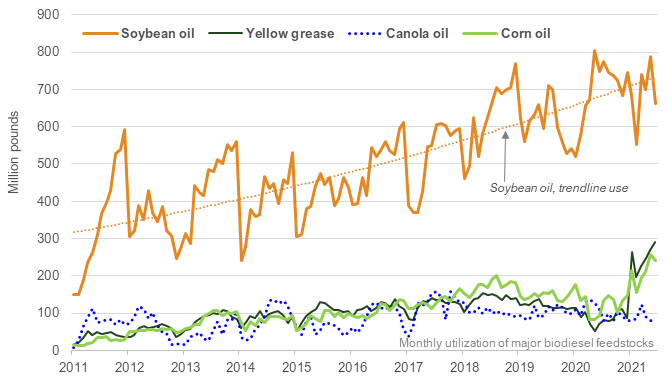