USDA reported that in January, 1.15 billion pounds of soybean oil were removed from stocks for use in edible applications. This volume was up 3 percent from December and up 5 percent from January 2020 as demand for soybean oil has proven notably resilient despite the pandemic and high market pricing.

In addition to January’s strong number for domestic edible use, soybean oil exports were also robust: Exports were around 299 million pounds for the month, an eight-month high.

Although soybean oil disappearance for inedible processing dipped to 411.9 million pounds, down 84 million pounds from December, disappearance was up 34 percent from a year ago, implying another month of good biodiesel production. December biodiesel production totaled 159 million gallons, and soybean oil utilization was 744 million pounds, up 38 percent YOY and accounting for about 62 percent of feedstock use compared to just over half of feedstock use in December 2019. 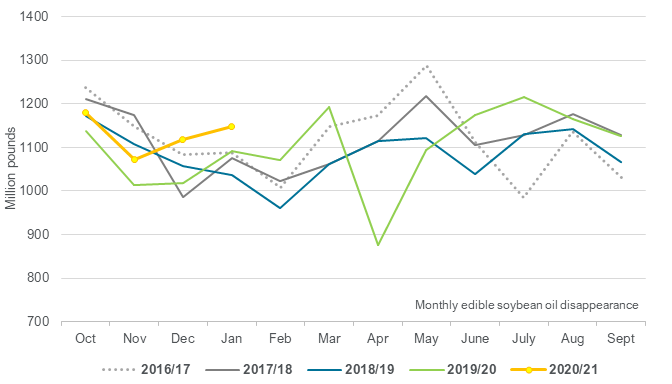