January crush missed expectations, which averaged around 186 million bushels, but in general, the market anticipates YOY growth in upcoming months. USDA raised projected 2021/22 crush in last week’s WASDE to 2.215 billion bushels, up 25 million bushels from the January estimate. A year ago, February crush (which tends to decline from January activity) came in well below expectations due in part to terrible weather conditions. This year, crush may see a gentler month-on-month decline, improving the odds of hitting USDA forecast.

Soybean oil yield remained strong last month at 11.81 pounds per bushel. NOPA members’ oil ending stocks were nearly unchanged from December, with only a net 5.4 million pounds disappearing by the end of the month. USDA’s fats and oils update on Mar. 1 will give us a clearer picture on January utilization, but it looks like demand was down a bit last month. 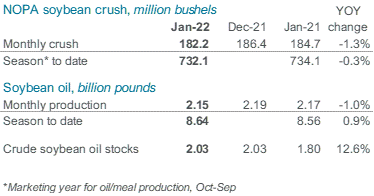 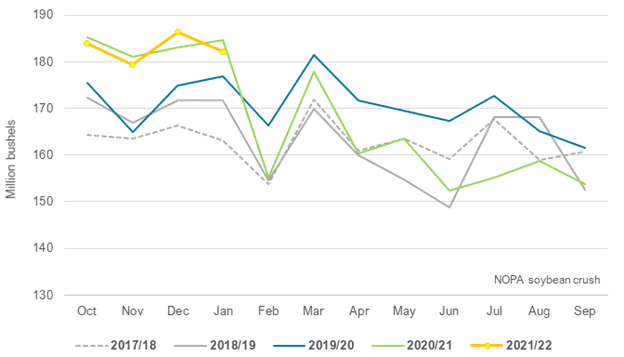