During 2020, the U.S. exported 815,739 MT, dry basis, of HFCS-55, down 9 percent from 2019 and the smallest annual volume since 2009. Mexico’s campaign against sugary snacks and beverages pushed imports of U.S. HFCS below 1.0 MMT in 2018, and volumes above that level may not be in the cards going forward. Still, the U.S. may see an increase in 2021 exports as Mexico sees more tourism and other economic activity post-pandemic.

HFCS-42 exports in 2020 were 48,918 MT, up 2 percent from 2019. Exports to Canada are on the rise and more than offsetting the decline in volumes destined for Mexico. In 2020, exports to Canada totaled 29,654 MT, up 38 percent year over year. The decline in domestic HFCS capacity after the sale of Ingredion’s plant to Jungbunzlauer may explain the rise in demand for U.S. HFCS. Canada imported 2,112 MT of HFCS-42 in January, another strong month. 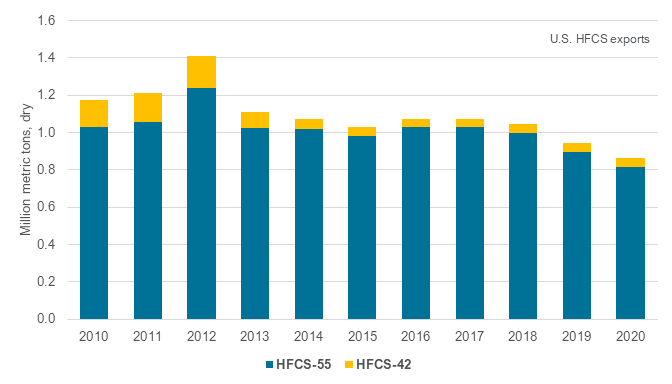