Jan-Jun soybean oil use for biofuel up 19% YOY

Biomass-based diesel manufacturers used 4.95 billion pounds of soybean oil during the first six months of 2022, a sizeable increase over H1 2021 and up 34 percent from Jan-Jun 2019, when the industry saw significant expansion in renewable diesel production.

Total known use of biomass-based diesel feedstocks in June was 1.9 billion pounds (of which soybean oil use was 43 percent); EIA does not report volumes for a few feedstocks, such as palm oil, but their use is modest and usually less than 10 percent of the feedstock pool. June feedstock use was down about 2 percent from May but up 27 percent year over year. In addition to greater use of soybean oil, yellow grease and distillers corn oil are seeing higher demand as feedstocks—even expensive canola oil is up from year-ago use. 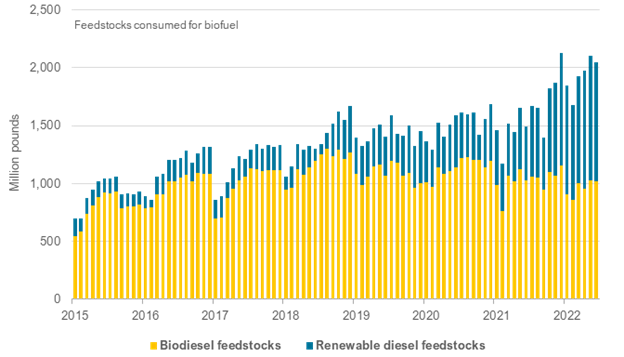