After a disappointing start to the season in October and November that saw cocoa bean arrivals down double digits, strong December arrivals have allowed the total volume to not just catch up but surpass last year’s pace. In a reversal of fortunes, season-to-date arrivals are now higher than the count at this same time last year. More specifically, during the first full week of December weekly arrivals figures were 120,000 MT, up from a more modest 80,000 MT in 2021.

The cumulative truck tally into the two major exporting port cities of Abidjan and San Pedro fell behind in the initial months of the new season, partly the result of a strike among dock workers in San Pedro and heavy rains. This may have encouraged commercial users to step up purchases and speculative funds to cover leveraged short positions, boosting prices by at least $200 per MT. Now, it appears that the cocoa was there all along, just temporarily undercounted in reported statistics.

As we near the height of the main crop, strong arrivals are expected through January. The dry season, or harmattan, is just now approaching southward toward the growing areas of Western Africa. Dry conditions should help with main-crop harvesting, drying, and transport in the months ahead.

At this point, farmers are optimistic about some recovery in crop size in Ivory Coast—with some reports of higher smuggling over the eastern border with Ghana. 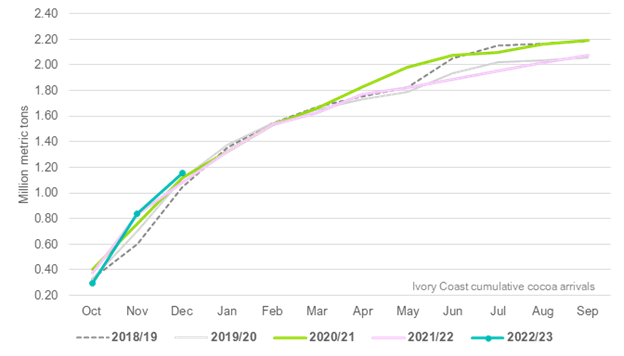