Inflation in commodities heating up

Two releases from the government this past week stoked fears of inflation rising faster than previously forecast, with both CPI and PPI numbers exceeding expectations. Seasonally adjusted, the Consumer Pricing Index (CPI) was up 0.8 percent in April and up 4.2 percent over the past 12 months. Excluding food and energy, prices paid by consumers still rose 3.0 percent over the past year, faster inflation than the U.S. has seen over the past decade.

The Producer Pricing Index (PPI) showed similar acceleration in inflation, up a whopping 6.2 percent over the past 12 months. This suggests manufacturers are paying more for raw materials, such as steel, copper, lumber, other commodities, or other key ingredients. Per the Department of Labor, these are the highest prices since 2008due to price appreciation for meat, energy, lumber, packaging materials, dairy, and other materials.

Economists had expected the April PPI up 0.3 percent, but the actual release was double that, stoking fears that the Federal Reserve may need to step in and raise interest rates sooner than expected. Secretary Treasury Yellen has been vocal in downplaying concerns of inflation after the latest round of COVID-19 relief and other spending. Likewise, Fed Chairman Jay Powell has spoken of a tolerance for above-target inflation in months ahead as the economy reopens and people get back to work.

The latest stimulus plan also included general allowances for infrastructure spending, but the rapidly rising cost of raw materials might temper future growth. Meanwhile, stocks saw a midweek setback and plenty of volatility after the CPI and PPI releases. Clearly, commodities are back in vogue and are being gobbled up eagerly as a natural underlying hedge against future inflation, just one more key factor that buyers will need to watch along with fundamentals in coming months. 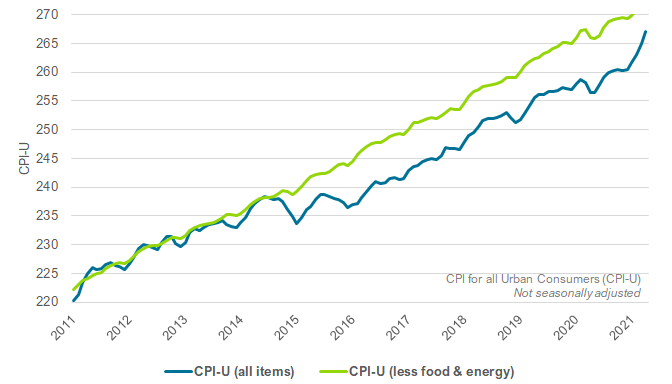