Notably, poor weather did pressure the cane crop in Uttar Pradesh, typically the country’s top sugar producer, where output is down about 7 percent YOY. Sugar output to date is up in other major grower states, including Maharashtra and Karnataka, up 16 percent and 30 percent YOY, respectively. Some 435 mills were operating as of last report, up from 331 mills a year ago. 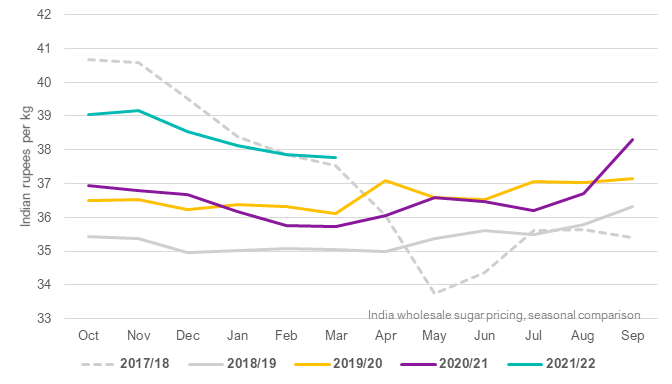 Sugar production in recent years has been limited by diversion of cane, second and third molasses, and IP sugar to fuel ethanol—government-set pricing differentiates between feedstocks like juice, second and third molasses, etc. The Modi government has rolled out multiple policies and programs to support the growth of ethanol manufacturing and continues to set aggressive ethanol-gasoline blending targets: 10 percent for 21/22, up from just 5 percent two years prior, rising to 20 percent by 2024/25.

Currently, India’s ethanol manufacturing capacity is near 6 billion liters; to meet the E20 target using domestic ethanol, capacity would need to rise above an estimated 11 billion liters. India plan on relying on both sugarcane and grains as feedstocks, which would require expanding building or upgrading nearly 200 facilities in just a few years—an enormous undertaking. Per FAS, India would also be looking to add some 70 to 75 new cane/molasses ethanol plants.

Through mid-March, total ethanol volume sold reached 1.13 billion liters vs. a contracted volume of 3.92 billion liters for 2021/22 (December-November). Total target volume is officially 4.16 billion liters. Per ISMA, the effective blending rate is 9.5 percent for the year to date. Some 86 percent of the year’s volume to date was made from cane juice and second (“B heavy”) molasses.

Per FAS, the blend rate from December 2020 through November 2021 is estimated near 8.1 percent, supported by the diversion of food-grade alcohol. 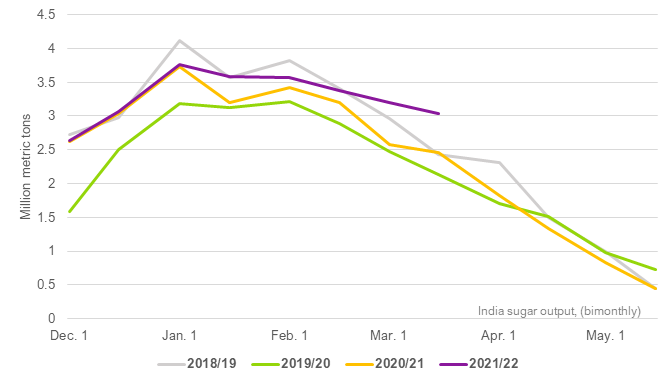