With one month remaining in the season, ICCO officials raised their 2021/22 deficit estimate to 230,000 MT this last week. Per Reuters, officials cited solid growth in demand in the current season as the principal driver of the shortfall, with Asian and European grind up 3.6 percent and 2.0 percent YOY, respectively, as both regions return to pre-pandemic consumption.

ICCO anticipates a more S&D picture in the new 2022/23 season starting in October. For that to occur, a recovery in the new main crops, especially in Ghana, will be necessary. However, recent estimates put Ghana’s 2022/23 main crop near 650,000 MT, seemingly not strong enough to meet global grind’s continuing growth.

Interestingly, ICCO officials did not mention the North American region’s lagging grind growth. Perhaps that is viewing the market through rose-colored glasses, but even with one disappointing region respectable growth in cocoa/chocolate global demand is still possible.

Despite the bullish news, cocoa futures retreated by nearly $50 per MT to longer-term support near $2,350. In recent months, the market found a short-term trading channel from $2,300 to $2,350 on several times.

Dry weather in July and August has many nervous about the size of the coming West African main crops. Although the second half of August did see some timely rains, these were likely too late to significantly improve the outlook for the first half of those new main crops. A recovery would likely not be seen until later in the main-crop harvest, towards the end of 2022. Even with a nominal increase of 1 percent in global bean grind next season, bean production would have to grow by 3.5 percent next season to balance fundamentals. Given the high price of inputs like fertilizer, that outcome is far from certain. 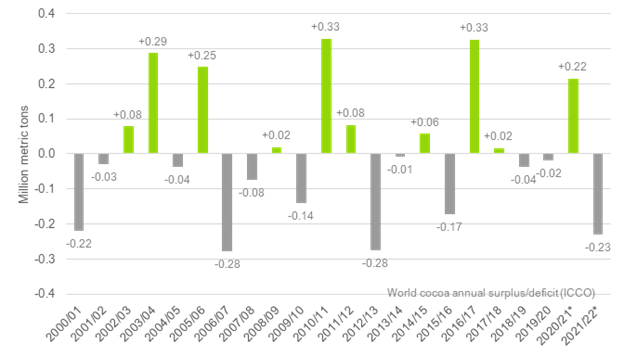