The latest estimate from International Cocoa Organization (ICCO) showed a 174,000 MT deficit in the 2021/22 season, little changed from their previous forecast of a 181,000 MT shortfall, partly the result of a weaker grind forecast, which may be reflected in Q2 grind numbers published next month.

The ongoing Russian invasion of Ukraine is seen as a drag on chocolate consumption across Eastern Europe in the wake of refugee evacuations and economic and trade disruptions. ICCO pegged total 2021/22 global output of cocoa at 4.92 MMT, down 6 percent from the prior season.

Demand is expected to grow for the second straight year, albeit at a relatively tame pace, up 1.5 percent to 5.05 MMT. Once Q2 grind reports are released, a more accurate reading can be taken on slower consumption, if any, that can be directly attributed to the Russia-Ukraine conflict.

Although weather has generally improved, and regular rains have returned across West Africa, weekly arrivals figures are still struggling to catch up to last season.

In other cocoa news, Nigeria announced its intent to join Ghana and Ivory Coast in implementing a $400 per MT Living Income Differential (LID) premium on all cocoa exports for the coming season. Notably, this development follows news that regulators from Ivory Coast have had to offer “in-country” differential discounts of $150 per MT to encourage demand for its cocoa exports.

Combined, the in-county discount and the $400 per MT LID yield a net premium of $250 per MT for all contracted cocoa exports. This compares with a historical pre-LID country premium of $300 per MT on main-crop cocoa in Ivory Coast from 2018 through 2021. So, the relative merits of the LID in terms of its success, at least, are up for debate. Ultimately, the question is whether those premiums paid by cocoa buyers are getting back into the pockets of actual farmers rather than into government coffers. 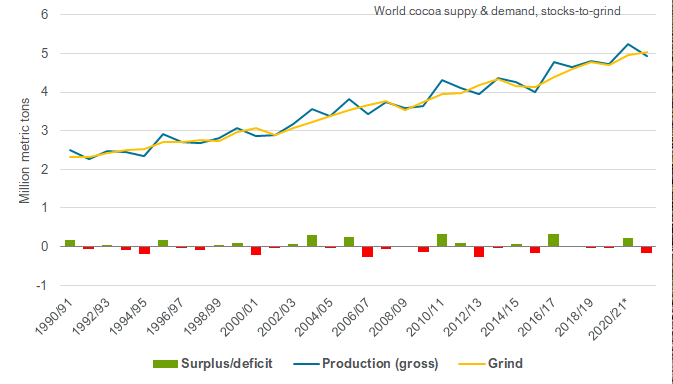