The North Atlantic hurricane season officially begins today, Jun. 1, and the National Oceanic and Atmospheric Administration (NOAA) has released its projection for the season. It echoes a previous forecast from researchers at Colorado State, calling for an above-average season for both the number of storms and overall tropical weather activity. This will mark the seventh consecutive season of above-average storm activity, suggesting higher risks for coastal populations and compounding volatility already seen for some commodities.

NOAA is projecting 16 to 21 named storms, including six to ten hurricanes and three to six major hurricanes (Cat 3 or above, with winds exceeding 111 mph). Last year saw a particularly active season producing 21 named storms and one of the most devastating hurricanes in recent history: Hurricane Ida affected almost the entire East Coast of the U.S. Its damage was so widespread that the name Ida was retired from the list of future storms.
As planting season winds down, buyers will naturally shift their attention to the weather. The most obvious commodities likely to be impacted by a more active hurricane season include oil and natural gas, not to mention the many distillate products manufactured at Gulf Coast refineries. When storms pass through the region, oil and gas companies may idle offshore platforms and other facilities and evacuate crews. While the storms may pass without causing substantial damage, operations are still hindered, and days of inactivity mean unused refining capacity. Notably, natural gas prices advanced this past week in parallel to the more active forecast.

Likewise, port operations can also be affected, and with Europe now leaning heavily on U.S. port exports of liquified natural gas, an active hurricane season would be more bullish to the NYMEX complex. Another commodity particularly vulnerable to hurricane activity is sugarcane grown throughout central Florida and southern Louisiana. Those regions are at risk of flooding and wind damage that accompanies more violent hurricanes. Domestic raw sugar futures are already trading at or near historic highs, so this market is not one needing further excitement and volatility. 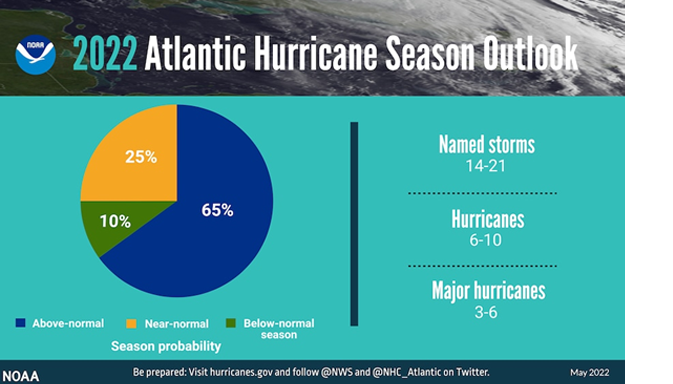