Somewhat surprisingly, the USDA May milk production report showed the herd was little changed from the prior month. In fact, while USDA adjusted the March milk cows figure slightly higher, it reported absolutely no change to the national herd or the dairy herd in the top 24 producing states. This outwardly uninspiring data warrants a closer look to determine what may actually be happening across the country.

Last month, the national herd was reported at 9,395,000 heifers. Likewise, the total milk cows in the 24 states was reported at 8,902,000 head. Compared to those figures, the actual herd did continue rising in the last month, up some 7,000 head. This third straight month of growth would appear to reveal an expansion trend now underway across the country’s dairy farms.

However, in adjusting the March number higher now, those looking for bullish fodder can perhaps deceptively claim that the herd was flat in April. The herd is now up by 35,000 head or 0.4 percent from January but down 98,000 head or 1 percent YOY.

Milk yield per cow was effectively unchanged year on year at 67.9 lbs of milk per cow per day in what is described as a late spring flush. Total April milk output was a respectable 19.15 billion lbs, down 1.0 percent year on year. Cumulative milk production was also down 1.0 percent, and we have likely now passed the peak of flush as summer approaches.

Herd growth seemed to show significant momentum in the previous two reports, which makes the flat trend of the last reported month striking—especially during springtime flush and peak milk output at this time of year. Ultimately, we suspect that some of the reporting was late and did not make this most recent release and thus an upward revision in the May cow numbers is likely. Our graph keeps the March reported herd number as originally reported to indicate that expansion is still underway. 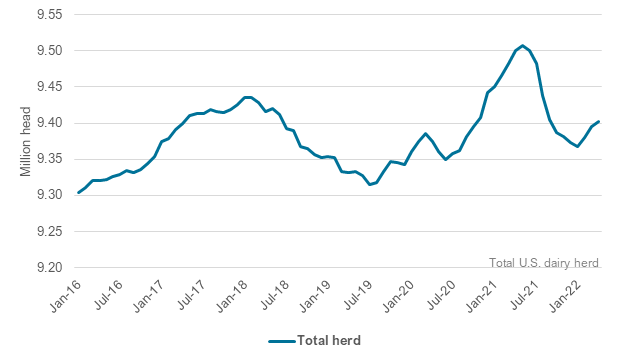