The famous prediction this past week called for six more weeks of winter as the most significant snowstorm in nearly five years made its way across the country, dumping several feet of snow in some regions.

Multiple fast-moving systems making their way across the U.S. are combining with the first real cold air mass descending from central Canada, resulting in snow from the Midwest to the Northeast.

As we approach mid-February, Mother Nature reminded everyone that winter is far from over as a polar vortex could see temperatures drop to dangerous levels. Cold air masses could penetrate as far south as northern Louisiana along with temperatures nearly 20 degrees below average. Chicago and major parts of the Midwest will see single-digit daily highs and overnight lows well below zero. Any low-pressure systems carrying moisture from the western U.S. will combine with these low temps to create additional snow risk in the week ahead.

This winter has been mild so far, and ice cover is minimal across the Great Lakes, but the first major polar vortex of the season is about to change things in the month of February. With much of the eastern half of the country about to experience a deep freeze, natural gas prices popped 10 percent this past week in anticipation of higher demand as prices rose to their highest levels since November. Gas stocks fell by 192 bcf, above expectations and one of the biggest single-week declines in nearly a year.

With only two months remaining in the traditional winter heating season, any rally is expected to be short-lived, but the sharp increase is a reminder that we remain in a weather market.

The pace of economic reopening and rate of vaccinations are likely to dictate the medium-term price direction of NYMEX contracts—as will export flows (including LNG) to Mexico. The market will have to wait to see if March comes in like a lion or a lamb. 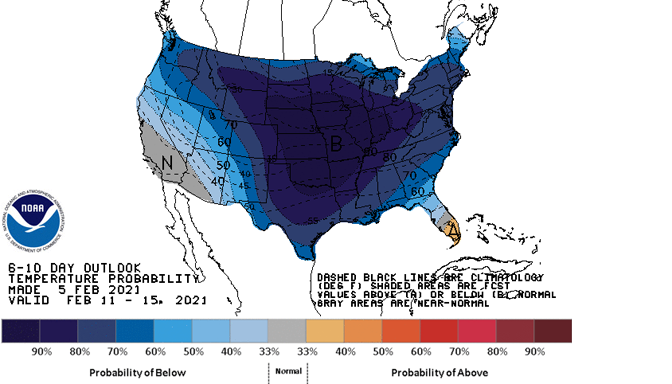